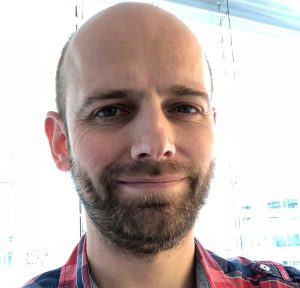 MOOV’s portfolio is vast and varied, including major TV events such as the Royal Wedding, music festivals, long-running comedy panel shows like Mock the Week and, of course, sport. The company has been involved with many groundbreaking projects, such as the development of graphics for Europe’s first-ever live Ultra High Definition football, rugby and basketball productions. In 2015 it launched a production arm, which uses a flyaway system to produce the world feed of the PSA Squash World Tour. Our conversation with director and Co-founder Nevil Appleton (pictured left) began with an analysis of the company’s achievements…

The name MOOV appears on a great number of credits these days. What has been the secret of your success?

It’s strange, I never see us as successful until I get asked and have to reflect on the last 18 years. The world of TV graphics has changed so much since I started as a (long-haired) design graduate from Newcastle. Believe me: over this time, we’ve had some scary periods where our numbers have gone up and down, yet somehow, we’ve always pulled through.

When I look back and compare to today, there are several things that have remained consistent, so I would credit these as the reason for our success. Firstly, we love sport, entertainment and the buzz of live television – this is so important in anything you do, you’ve got to enjoy it or what’s the point?  With television, you’re always presented with challenges – fix problems with creative solutions and technology, that’s your drive.

Secondly, we’ve always managed to forge great relationships with our clients and we listen. I don’t like being seen as a ‘services provider’ either, but as an extension to a team or department. By caring and being involved, you get better results.

Finally, and probably the most obvious, big or small, we’ve always had a great team ethos and energy. Good people are the key to our business and although the hardest thing for me has been to let go of some things I’ve done for years, it’s been essential in getting to where we are today – seeing others get the same buzz from their job is such a good feeling.

Augmented and Virtual Reality have come on in leaps and bounds? What are the next innovations we can expect?

I think we have hit a point like most things where the technology is there and anything is possible, whether it is AR, VR, 360, 360 with AR or any other combination. Render capabilities have come on leaps, too, and I’ve seen some projects recently that have been mind-blowing especially with vendors adopting engines like Unity and Unreal. That said, since day one, it’s all down to what you’re trying to achieve, you then bring the right solution and creativity to it.

Broadcasters like BT Sport now create additional live content in 360 with AR graphics and data, and this is something we’ve been working on for a few years now with great success and it certainly does help engage new audiences. So, the next wave of innovations I think will be enhancements to the existing products, perhaps higher frame rate and better picture quality 360 cameras. Higher Dynamic Range, no doubt, we will see along the way, too. As creative people, our innovation is to take all these things and turn them into something great.

Can you tell us about MOOV’s Carousel?

Carousel is a MOOV solution for displaying live sports data and editorial content via a channel automation system. It was first developed for use on BT Sport Europe, the precursor to BT Sport 3, providing a Graphic L on screen 24 hours a day.

The system is formed of two distinct parts. First, the web-based user interface allows the digital team to schedule live sports data on a programme-by-programme basis. We ingest the daily schedules from the automation system at BT Sport to form a rundown for each 24-hour period. The digital team can then schedule specific content to complement the show that will be on-air at the time. So, for example, if a European football match is being broadcast we can schedule all the latest results, fixtures and league tables for the various European Leagues. To complement this we have provided tools for promo scheduling and for editorial content such as sports news headlines.

Secondly, with the broadcast chain at Ericsson, we have a second system running in-sync with the playout automation system. As a new programme part starts, the system looks up what should be scheduled for the graphics and then pulls in the live sports data from our comprehensive database in Stratford. At the end of every part the graphic is automatically removed as the commercials begin.

The system is designed to run continuously without human intervention, automatically ingesting schedules, and updating all the graphics with live sports data. It has proven to be extremely successful. BT Sport’s digital team will constantly update the information on screen, keeping viewers abreast of the latest sports news stories.

What are the challenges facing you for the remainder of 2018 and into 2019?

I think the challenges are the same as ever. The landscape is always changing, but at the same time it is opening up new opportunities. Sorry, that may be a little vague but we look forward to looking forward!

As we mentioned at the start, you have many projects on the go. What recent sports-related case study particularly illustrates the service you provide?

At the moment everything seems recent and we are privileged to be working on so many high-profile projects at the same time.

We’re just about to finish an amazing third season of UEFA Champions League football for BT Sport and we’re already planning the fourth. This is a huge project and utilises everything we do as a company from live data handling software, live graphics, augmented graphics, 360 virtual graphics, social media apps… the list goes on.

Another great sport we’ve been a part of for over 15 years is horse racing and we’re fortunate to be on the road pretty much every weekend with ITV Sport providing live betting, presentation graphics, VT analysis and live virtual graphics. Just days ago, ITV Sports coverage of The Grand National coverage picked up a BAFTA TV Award.

In July, once again we will be at Wimbledon with BBC Sport with a complete presentation service of graphics and content design that also utilises IBM data. In addition to this we’ve been working on a great project with the All England Lawn Tennis Club, which we’ll be announcing very soon!