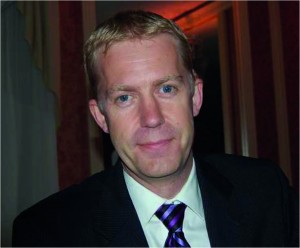 On a day (2 November) where the broadcast industry reflected on the remarkable evolution of TV technology – prompted by the 80th anniversary of the BBC’s launch of the first regular UK TV service – it seemed only appropriate to be speaking with SAM EVP & general manager, Media Software Solutions, Neil Maycock about the remarkable innovations shaping the future of broadcast production in our own time.

“I think it is significant and should be celebrated,” remarked Maycock of the BBC’s landmark 1936 broadcasts from Alexandra Palace – the north London entertainment venue that provided the main location for the broadcaster’s programming until the 1950s. Altitude flight pioneer Squadron-Leader Swain and Postmaster-General R.C. Norman were among the contributors to a first-day schedule notably heavy on ‘variety’ content (the full listings made for fascinating reading and can be found here: https://genome.ch.bbc.co.uk/schedules/bbctv/1936-11-02).

But SVG Europe’s conversation with Maycock focused on more current concerns, not least the continuing advance of 4K, the challenges related to HDR implementation, and some specific highlights from what has – by any standards – been a remarkable year for sports production…

When you reflect on 2016, how do you assess the progress of 4K for broadcast production?

We have done quite a lot in Europe with 4K, particularly around live production, and I think it is clear that in the sports arena you have got [the likes of] BT Sport and Sky who see it is a differentiator. It is a bit reminiscent of the early days of HD when traction first started to occur in the production area. At present I would say that there is more activity in Europe than in the US, and the desire to experiment [with 4K is especially apparent] in sports.

I think in some quarters there was a feeling that [producing 4K] might involve a different creative process, but in fact artistically it has been very similar. For example, BT has talked about how they had thought that 4K production would entail a different creative process, but that they have actually done a lot of simulcasting of shots for 4K and HD. Generally speaking, it is clear that [people will want to] carry on producing simultaneously in HD and 4K [for the foreseeable future].

Do you think that sports will continue to spearhead the adoption of 4K?

Yes, I think it will, but we will also see more 4K film content coming through. Sports and movies will be the primary drivers of adoption. By contrast there has been zero interest on the news front because [4K] does not really add to the content, and [in fact the more critical driver of change in news] is the need to support non-broadcast formats and video direct to mobile phones. So you could say that the industry is being pulled by two different forces – sports, where there is a desire to do everything in the best possible quality; and news, where achieving ‘fastest to market’ is the key driver.

How would you describe the SAM strategy with regard to supporting the move towards 4K workflows?

One of the key aspects is the ability to support the co-existence of 4K and HD. One of the reasons we have been doing so well with the Kahuna [switcher] is its ability to do internal conversion – enabling what we call ‘format fusion’. So we can happily mix and match HD and 4K, simulcast HD in 4K, achieve up-conversion and down-conversion on the fly, and do picture-in-picture. That complete flexibility has really won over a lot of customers.

What’s your feeling about HDR – a slighter longer-term prospect…?

I think it is slightly longer-term, although certainly some broadcasters are interested [in investigating the possibilities]. I think we will see increasing demand from the consumer side as some of the latest Xbox and Playstation formats are HDR-capable. If people are getting a better picture from an Xbox than is being broadcast, that is the sort of thing that will stimulate consumer demand. But it is clear that there is a way to go on standardisation yet.

At SAM we have the advantage of already having substantial experience of HDR [through working with it] on the cinema side of the business. So we feel that we will be in a good place [for HDR in broadcast] once the standards begin to settle down.

It’s been a great year for SAM in sports, but if you could only nominate one highlight what would it be?

There were some great projects, as you say, but I would select the collaboration between BT Sport and Rogers Media to provide 4K coverage of an ice hockey game to viewers in Canada. The ability to deliver a single 4K production transatlantically was very impressive.