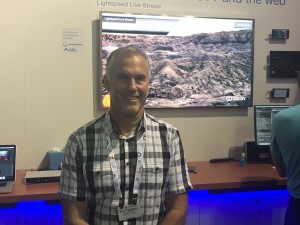 Underlining the extent to which ready-to-stream broadcast production is now being brought within the reach of an increasingly broad range of end-users, Telestream used IBC 2016 to highlight the introduction of Wirecast Gear – a portable computer workstation fully configured for live event production and streaming.

Equipped with Wirecast Pro live streaming production software and designed to be up and running “in a matter of minutes”, Wirecast Gear is expected to resonate with sports broadcasters, news services, event produces, educators, houses of worship and other customers seeking an ‘out of the box’ streaming solution.

Not surprisingly, this emancipation of broadcasting technology figured prominently during SVG Europe’s conversation with Telestream’s VP of Desktop Products, Scott Murray, which took place during the recent IBC show…

Speaking generally, what do you observe at the exhibition that is genuinely new in terms of sports broadcasting and the technology that supports it?

It’s not so much about what is new at the show – it’s more about the consumer and how the viewing is consuming sports. It’s important to note that the sports events that have been near and dear to sports’ enthusiasts will continue to be so – that will never change. But you have now got people consuming these events [in different ways] and so you have to think about [those platforms] as well as what additional information you need to augment the live event itself. [This can include] show highlights and summaries of games.

What else do you observe about the changing nature of sports viewing?

What is also noticeable is a growing demand for the second tier of sports events. I can only speak from a US perspective, but I am pretty sure that translates into Europe. [At this level] costs need to come down to be able to produce coverage, so we have seen a strengthening of the means by which this content can be delivered to the customer. Wirecast Gear is one way of doing this with very high quality and [cost-efficiency].

Television and the demand for a wide variety of content is never going to go away. The question is how best to create, produced and distribute that content.

Any other, more general trends you notice at the show?

The issue of [competition regarding standards], for example AIMS versus Aspen versus NDI, is the obvious one that springs to mind. The emergence of HDR is also pretty cool. The rise of VR is also interesting; it’s very early days, of course, but I think we could see a parallel [application-wise] with 3D, where people would want to use the technology in order to sit down and enjoy a match with their friends.