AE is now in its 27th year of serving the broadcast graphics industry and has thriving subsidiary companies in South Africa, India and Australia.

Its global team is looking forward to delivering its services on a number of major global events over the next year and beyond. Our chat with Stuart Coles, AE’s Chief Commercial Officer, starts with a look at a growing area.

Has the increased use of OTT solutions affected that way you design graphics for use across multiple devices?

I think it’s not so much about designing one set of graphics for use across multiple devices but more about finding a way to deliver graphics that are built specifically for that device. OTT is clearly a growing area of the market and one that we have to consider in all that we do, but it doesn’t mean you should compromise the quality of your broadcast graphics that are going to be viewed on a linear platform.

There’s an argument that some of the graphics you currently see on TV sports broadcasts are over-simplified and designed with too much focus on the fact that they are going to also be viewed on digital platforms. 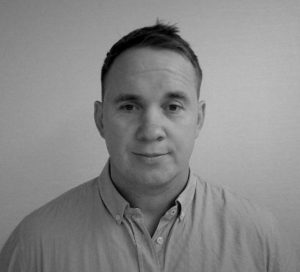 Our preferred approach is slightly different; we are offering our clients the opportunity to have all of the bells and whistles on the primary graphics for traditional broadcast feeds, but also the option of having automatically and simultaneously generated graphics feeds that are optimised for digital play-out. There are various cost-effective ways of achieving this using cloud-based renderers and AE-developed software applications that enable us to share data and commands across different render platforms.

This means that our clients can tailor their graphics content for OTT users without adding significantly to their production costs or without compromising on the quality of their linear broadcast graphics output.

What next for Augmented Reality and how can broadcasters get more from it?

The delivery of AR has been a major feature for us for many years now and we feel we have led the way in R&D and pushing the boundaries of what can be achieved, especially in the OB environment. We feel we have a good understanding of each of the major systems in the market and the pros and cons associated with them.

In order to take it to the next level, we feel data integration and better ways of presenting live, in-depth data is the key factor. Presently, AR is most often associated with a visually striking way of presenting team line-ups or a match ident at the top of the show. Of course, there is value in that, but you need more.

Our focus now is on bringing more data into our AR content, using it “in-game” to help tell the story of what is unfolding. Whether that is through data that we are capturing ourselves as part of our wider role at sports events or through strategic partnerships with specialist data providers, this is where our focus lies.

We have some exciting projects coming up across our three major current sports, football, cricket and rugby, where we’re looking forward to showing some of this new AR content.

What are the challenges facing you for the remainder of 2018 and into 2019?

The big focus for 2018 has obviously been FIFA World Cup and I’ll tell you a little more about our involvement in that shortly but there are a number of other exciting projects, past and present, not least the IPL which recently finished in India and was a huge operation for us. In addition to providing host broadcast graphics and multiple AR systems across every match, we delivered six regional multi-language graphics channels for Star India, remotely, from their Mumbai hub.

2019 is going to be a big, big year, with two World Cups, cricket and rugby union. The former being held in England and Wales and the latter out in Japan. Both events obviously present a great platform for us to deliver some of the innovations I’ve talked about today and we’re very much looking forward to making the most of the opportunities to do so.

Outside of traditional sport, we’ve also made our first foray into eSports working on projects both in Australia and the US. It’s early days for us in that space, but clearly represents a major growth area and we’re excited at its potential and the value we can add to eSports production.

Do you have any future plans you can share with us?

Well, it’s been an interesting period for AE, we are now under new ownership. Importantly, the same management team will be driving the company forward but we are obviously looking for new opportunities and have greater resources for investment, which is exciting.

We want to explore new sports – it’s something we have a track record of doing over many years, recent examples being kabaddi, that we’ve helped build in India with Star Sports and rugby league, that we first tackled in Australia and have since picked up a contract in the UK.

We’re basically open to opportunities on any sport or event, but there are a couple of prominent, global sports that we’re looking closely at. For us it’s a case of being proactive, working our how we think we can raise the bar and developing and marketing a range of solutions to new and existing clients.

Virtual Studios is also an area of focus for us. It’s obviously a concept that has been around for some time, but the technology advances made by engines such as Unreal has really raised the bar in terms of what is possible. We are dedicating R&D time to this area and have some exciting global projects in the pipeline over the next year.

Finally, is there a European sports related case study you can share?

One that we’re very excited about and proud of is the BBC’s FIFA World Cup Studio in Moscow. Working closely with BBC’s creative and technical team and set designers, we’re augmenting the physical studio with virtual windows and AR content to provide a 360-immersive feel to the space. 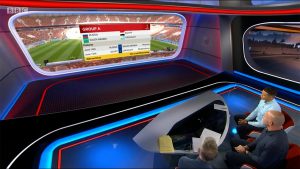 The graphics play-out is being achieved by Vizrt engines, using AE-developed plugins and software applications, enabling extremely fast calibration and setup. The content includes a virtual ceiling, graphical representations of Moscow in the side LED “windows” and an area at the back of the studio that we are using to display high-resolution live video feeds from match venues.