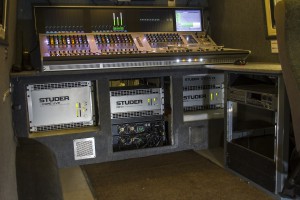 HARMAN’s Studer consoles have long been a mainstay of studio complex and OB facilities worldwide. The brand’s enduring focus on delivering a comprehensive and easy-to-use feature-set has secured a strong market presence with console ranges such as Vista – but what are the drivers that look set to inform the next generation of broadcast audio desks?

“Expect consoles to become smaller and lighter, modular, faster to set-up and configure, and more able than ever to work as part of a larger audio network,” predicted Roger Heiniger, Vista product manager for Studer, during his recent, far-ranging conversation with SVG Europe…

The last few years have witnessed a significant increase in the competitiveness of the broadcast console segment. How would you assess Studer’s market position at this time?

Studer consoles continue to be specified by the world’s top broadcasters and facility providers, with reliability, high build quality and ease of use cited as key reasons for purchase. Studer has always strived to innovate and be able to introduce revolutionary technologies, such as our award-winning Vistonics console user-interface and Infinity Core range of processing engines.. Studer is able to share and benefit from being part of the Harman group of companies, which encompasses an impressive range of pro audio, video and control system manufacturers. The collective knowledge and support provided by this group, along with Studer’s existing heritage, puts Studer in an enviable market position.

With regards to OB specification and remote production in general, what do you think are the principal drivers of console design at this point?

Notwithstanding reliability and efficient use of space, principal drivers in OB and remote production today are centred on networking and the ability to distribute the main elements of an audio console system (ie. control surface, processing core and stagebox I/O) across physically separate locations – perhaps many miles apart. Broadcasters are experimenting with the concept of transporting raw signals from a remote sporting venue back to their existing studio facility, and console manufacturers must therefore think beyond the control surface itself to the wider audio production system, and offer networking and signal transportation solutions that are cost-effective, reliable and easy to implement.

To what extent is the R&D process at Studer informed by the comments and input of sports broadcast professionals?

Studer is committed to constant engagement with users including console operators, engineers and systems integrators. We product managers regularly meet with customers in order to gather feedback first-hand. This feedback is then passed directly on to our R&D team, who rely on this type of guidance to ensure that their work is relevant and will lead to products that will meet (and hopefully exceed) customers’ needs. Several features in our Vista range of consoles have come about as a result of requests from those involved in sports production, for example audio-follow-video control, through to clean feed/mix minus generation with sophisticated talkback arrangements.

How commonplace do you expect IP-based operation to become in sports production over the next few years… and what implications will this have for Studer?

There is no question that IP-based technologies will become a key component of broadcast production systems over the next few years. Audio-over-IP (AoIP) is a buzzword in the industry at present, but while many customers are asking for AoIP functionality it isn’t always clear how AoIP will actually be used in practice, and there remains confusion around the different proprietary AoIP formats in addition to the now-ratified AES67. Some customers are understandably concerned about transitioning to IP too quickly due to the different skills required in the design, maintenance and troubleshooting of IP networks. Studer believes in an agnostic approach to AoIP, and our future network solutions are being designed around true interoperability, ease of system management and, of course, reliability. Once again, Studer has to think beyond the console to the wider audio system.

If you had to nominate one specific Studer success story in sports production during recent years, what would it be?

Studer supplied a complete audio production system solution to the BBC for its domestic coverage of the London 2012 Olympic Games, comprising seven consoles, an audio router, redundant I/O and integration to a third party control system. All kit was installed at the BBC’s temporary broadcasting facilities in the International Broadcast Centre and allowed the BBC to produce what is widely regarded as some of the best sports coverage ever made. The BBC’s lead TV Sound Supervisor, Peter Bridges, was also awarded a craft BAFTA for his efforts.

In what ways do you expect sports audio professionals’ console requirements to change in the mid- to long-term future? Will delivering consoles that are lighter, more compact and suchlike remain important priorities?

Customers are always looking to make most efficient use of space in either an OB truck or studio centre. Console surface footprint is therefore always an important factor, particularly so in a sports OB truck, and there is a general trend towards more compact consoles from all manufacturers. Rack hardware (desk cores, I/O frames, etc) and its associated power and ventilation requirements are also important considerations for customers, and again there is a trend for rack hardware to be as space-efficient as possible. Sports OB crews also tend to have less and less time to rig and de-rig, and so the size and weight of console I/O frames (stageboxes), along with their simplicity of configuration and operation, is more important than ever. Expect consoles to become smaller and lighter, modular, faster to set-up and configure, and more able than ever to work as part of a larger audio network.