The exponential growth of connected devices, emergence of social media, analytics, and cloud computing (SMAC), and acceptance of bring your own device (BYOD), are all resulting in a major transition in the way enterprises engage with technology. Our Sit Down with Brian Morris, Vice President and General Manager, Media & Entertainment Services, embraced the wide scope of the company’s activities.

Last year Tata Communications said, “We believe one of the biggest opportunities for all sports lie in more immersive viewing experiences such as virtual reality (VR) and augmented reality (AR), as well 360-degree and Ultra High Definition video”. How has your involvement in these technologies progressed since 2017?

While virtual reality (VR) is making waves in the industry, it’s fair to say that the technology has not yet hit mainstream. However, it’s simply a matter of time and we are seeing more immersive technologies being deployed to create more engaging viewing experiences by the likes of Sky Sports with its dedicated VR app. 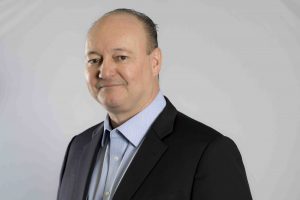 One of the technologies which is paving the way to fully-fledged VR broadcasting is 360º live. Tata Communications and Formula 1 conducted a test of truly live 360º video at the 2017 Formula 1 Singapore Airlines Singapore Grand Prix to show how the F1 racing experience could be augmented for fans worldwide by enabling them to experience the action in and around the circuit almost as if they were there.

The proof of concept showed the potential of live 360º video to augment the TV viewing experience and make VR mainstream in live sports and entertainment. By eliminating delay, it’s possible to offer fans truly live 360º video experiences on a global scale. This will enable sports and entertainment organisations to engage with their audiences in new ways and generate new revenue streams – helping the 360º video and VR market achieve its USD 60 billion potential.

Cyber security is on everyone’s minds. How can you reassure your clients?

Cyber-criminals tend to pick their moments when it comes to mounting high-intensity attacks on multinational organisations. Opportunistic periods such as Christmas, holiday booking season and major broadcast events – including sports – are considered ideal times to bring specifically targeted organisations to a grinding halt as this gives those behind the attack maximum leverage for providing visibility to a cause or, in most cases, negotiating a ransom.

The key principle of cybersecurity which organisations must follow is that security needs are multi-layered, integrated and backed by a trusted partner. This involves investing in preventive, detective, retrospective and predictive layers of security to ensure that you are doing everything in your power to proactively identify threats, respond to them immediately, learn from them quickly and reinforce your defences with agility. These four distinct security mechanisms form a comprehensive, constant protection for organisations at every stage in the life cycle of a security threat.

Digital infrastructure providers, such as Tata Communications, also need to be able to anticipate an attack so that it can be prevented before it debilitates a system. This can be done through constant monitoring, predicting patterns early and being prepared to deal with it as it unfolds. Putting the network layer as the first level of defence allows for blocking malicious traffic in its tracks closest to its source before it enters the information highway.

With its worldwide network presence combined with the detection and mitigation infrastructure, Tata Communications constantly detects anomalous traffic patterns early and is able to scrub traffic in real-time. Clean traffic is then routed into the network, whereas any suspicious traffic is blocked closest to the source.

How do you see the OTT developing over the next twelve months?

Services like Netflix and Amazon Video have emerged as major players in the next-generation media ecosystem, bringing with them a new, flexible way of watching content on multiple devices, anywhere, at any time. Meanwhile, legacy broadcasters have had to adapt their offerings to suit these evolving viewing habits, including catch-up services like BBC’s iPlayer and subscription-based platforms like Sky’s Now TV.

While it may be tricky for smaller rivals to make their mark, offering niche content or delivering something unique that enhances the viewer experience is the key. OTT networks have dramatically lowered the barriers to entry, so that while big players like Netflix may be leading the way, smaller streaming networks are also now in with a shot at success.

There is a growing number of streaming services that stand out from the crowd by offering a carefully curated selection of content aimed at specific audiences. One example is Shudder, a horror film-based subscription streaming service, which launched in the US in 2015 and later expanded to the UK in 2016. While Shudder is operated by US TV network AMC and not a start-up firm, it illustrates how smaller players targeting a very precise market can prosper.

Outside of TV shows and films, there’s also a huge opportunity for other industries to produce their own tailored videos. The ability to offer curated content is particularly useful in the world of sport, enabling teams and leagues to complement match coverage with additional content. In-depth analysis and behind-the-scenes player footage can be used to enhance the fan experience, which is especially useful for fans based overseas who wouldn’t otherwise have such direct access to their favourite teams.

Various professional sports organisations have started to branch out into streaming their own content including NFL Network and NBA TV while Tata Communications works with F1 and Red Bull TV. The OTT approach can also help international news networks to reach new audiences in other countries, with Tata Communications already working with Asian Television Network (ATN) Canada to do just that.

How does your joint offering with Primestream benefit your clients?

Sports, entertainment and news organisations are under pressure to bring their global audiences more content, live, 24/7, across different digital platforms, and in new formats such as UHD and live 360-degrees. In this high-pressure environment, it’s no longer viable for production teams to work in silos, with files scattered around on different hard drives across geographies. Our joint offering with Primestream unifies and simplifies Media Asset Management from capture to distribution, helping to meet audiences’ insatiable appetite for new video content, and more powerful viewing experiences.

Do you have an innovative European sports related case studies you can share?

Like many other global sports, the European Tour is looking to change the conversation happening around golf to attract new, younger fans, and evolve from a sports competition to an entertainment brand. At the same time as introducing new playing formats such as Golf Sixes, Shot Clock Masters and The Hero Challenge, European Tour is looking at how it uses digital to better engage fans. 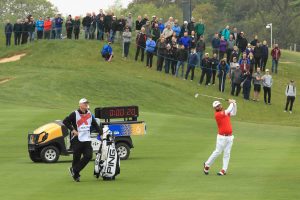 Andy Sullivan of England hits his second shot on the 4th hole on the shot clock during the Group A match between England and India during day one of GolfSixes at The Centurion Club on May 6, 2017 in St Albans, England. (Photo by Andrew Redington/Getty Images)

While mixing up the format is necessary to modernise the product, consistency is key when it comes to fan experience. Sports such as golf have enjoyed the loyalty of core fans for a long time, but the modern consumer of sport is only loyal to their most recent experience. From a technology perspective, this presents a challenge given that the European Tour’s Race to Dubai – our global season-long schedule – boasts 47 events which take place across 30 countries.

It’s an exciting time, not just for the European Tour, but for fans of golf and sport more generally. The combination of exposing golf to new viewers and building the profile of top golfers, as well as using new formats and how content is delivered has the potential to be very special.