SVG Europe Sit-Down: The Switch’s Jessica Mintz looks at the impact of remote production and offers thoughts on OTT

The Switch was created in 1991 to provide cost-effective, customer-controlled television signal routing services to the broadcast industry. Since that launch, The Switch has grown to 51 locations worldwide and is additionally built into more than 140 sports and entertainment venues across the United States.

In 2016, The Switch was awarded a US system patent for its customer-controlled video data content delivery. It has also received a number of awards for its SwitchIT innovation and network automation. Our discussion with Jessica Mintz, Vice President, Marketing and Corporate Communications, starts with a look back.

It is still early 2018, so can you look back and share with us some milestones for The Switch in 2017? 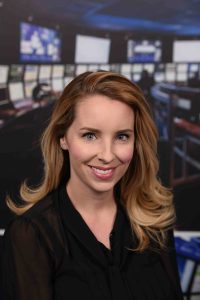 Has the increase in remote production impacted the services you offer?

It has assisted multitudes of customers in ‘HomeRunning’ their productions back to their Master Control Centres, thus saving them time, resources and allowing an increase in the amount of games they can televise each year because of the gain in resources at-home production enables.

In addition to its at-home production products of ‘The Switch Cumulus,’ and ‘HomeRuns,’ The Switch also operates a fleet of 6 remote production trailers that each can handle a minimum of eight inbound and outbound video or ASI paths and up to 16 Ethernet or Internet connections. This is ideal for production workflows from venues that include golf courses and race tracks.

Where next for IP technology in the broadcast field?

IP continues to be a trend that cannot be ignored. The Switch is currently developing an IP based product it hopes to launch later this year. Additionally, the High-Quality and Low Latency Ethernet service of the Switch, that guarantees Network Availability, allows mission-critical file-based applications to seamlessly integrate production workflows between the field operation and broadcast centre.

Customised content solutions for the Over-The-Top (OTT) environment is key to monetisation. What can you offer in this area of broadcast?

The Switch is known for its Network and its strong reputation in the linear production world, but The Switch Over-The-Top (OTT) services allow content to be acquired, encoded and formatted – Output Protocols – for access to Content Delivery Networks (CDN) via Public Internet access, The Switch Ethernet service, and/or by ‘Direct Connect’ to web service distributors that are, for example, compatible with Amazon Web Services (AWS). In 2017, The Switch supported many producers of nonlinear content including large productions such as the FarmAid Telethon, A Capitol Fourth, and the 60th Anniversary GRAMMYS, among others.

Can you explain SwitchIT? And what are the benefits to your customers?

SwitchIT is the US patented customer-controlled software that provides customers with the ability to order, control, and monitor their feeds, from the convenience of a touch-screen terminal, desktop, or laptop from any location on The Switch’s global network. SwitchIT allows customer to schedule or book on-demand, their feeds and only charges customers for the time they used, not what they booked, in one-minute increments. Utilising SwitchIT gives the customer management and control of The Switch Network with visibility into the cost of utilisation in real-time.

What are your plans for NAB?

The industry knows The Switch for its Network and its strong reputation in the transmission space, but at the 2018 NAB show, we plan to exhibit our complete line with emphasis on products such as The Switch Cumulus, OTT Services, and Studio Services. The Switch is a global full-service solutions provider, offering advanced video switching and local fibre circuit services, scalable Ethernet, at-home remote production, studio and Over-The-Top services, supporting the complete media ecosystem.

Do you have an interesting European case study you can share with us?

Over 2018 we continued our expansion. One specific example of this included expanding the depth of our connectivity with SIS and Sky UK. One interesting case study is our work with Perform supporting their US NFL aggregation for the 2017-2018 season.

This was a unique challenge because of the different transmission mediums — fibre and satellite, different locations, and various formats of the content. On any given week, we would access up to 12 concurrent games for transport to Performs DAZN platform. This combined our core competencies of international transmission management, encoding formats, transcoding workflows, over our ever-expanding network.