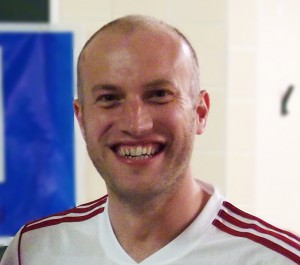 Sports clubs wanting to increase the engagement of fans by using various sports apps often find themselves facing several challenges in implementation. This is particularly noticeable when trying to get the apps to interact with the rest of the stadium technology. Tripleplay works to help stadiums overcome these problems.

“Ensuring fans feel actively part of a club is a key ingredient to getting maximum return on their time within a venue,” says marketing manager James Keen. “Fan experience is a key focus for clubs with many of them clubs exploring social, statistical and club apps to connect fans with each other. Our USP is that we have the technology that integrates mobile apps with digital signage.”

The London-headquartered company has been developing solutions for the sports industry since the FIFA World Cup in South Africa. Prior to being invited by Sony’s South African dealer, Dimension Data, to run digital signage system over screens at Cape Town’s Greenpoint stadium and Nelson Mandela Bay Stadium, the company had established itself as an IPTV and video streaming software specialist focused on the enterprise market such as hospitals and hotels.

Founder and CEO Steve Rickless pioneered digital TV as part of the team that worked on the original BT Martlesham VOD trials to 2,500 homes in 1995, then spent time at Virgin Media, Oracle, Accenture and KPMG. With Graeme Ogilvie, Operations Director, and Dr. Peter Martin, CTO, in 2001 he launched Tripleplay Services as a consultancy and has since steered it to become one of the dominant players in this emerging market.

“The World Cup was the first time we’d installed IPTV in a stadium and it sparked interest in what we could do,” says Keen. “Slowly but surely we’ve grown a reputation for delivering this streaming media content for clubs by hitting a sweet spot where cost and quality seem to beat our rivals.” 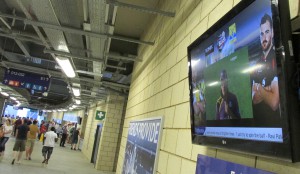 One of Tripleplay Services’ many major sports projects, at Edgbaston Cricket Ground in Birmingham

Last year it began working with Manchester City FC to run signage and TV across over 1,000 screens at the Etihad Campus. The same system links TV screens in the concourse and concession stands with screens at the adjacent fan park. The same platform is used to connect offices, signage and IPTV at Melbourne City FC and New York City FC for Etihad owners Abu Dhabi United Group.

The company has also outfitted the PGE Arena in Gdansk and Zenit St. Petersburg and Spartak Moscow’s stadia ahead of the 2018 FIFA World Cup.

“As a software developer we are hardware-agnostic so that means our solutions are agile,” says Keen. “When business models change we can integrate new software and react to client needs rather than having a product locked into particular hardware that can’t be manipulated to individual requirements.”

TripleSign works as either a standalone digital signage system or in conjunction with TripleTV IPTV and TripleLive Live Video Streaming to stream advertising and comms messaging around a stadium or training ground integrated into live TV broadcasts or live camera feeds from the arena itself. New for this year is a 4K option that uses technology hardware from media player specialist Shuttle.

It does not produce the video content but provides the tools for club media teams to do so. “Tripleplay signage has its own content creation software inbuilt for clients to upload video, RSS, text and live TV to create their own content,” explains Keen. “Because it is also a TV delivery platform we can take in feeds from other places like a TV studio or TV production suite. We do this at the Etihad so that the club can live vision mix full production on match day while sending out other signage content over the same Tripleplay platform.”

In addition, the company has branched into developing mobile apps. These include a video analytics application which feeds data from Prozone, Amisco, SportsCode and Opta, plus video content from the training ground and match days into an app personalised for each player for coaching and analysis. Clubs can also offer players a lifestyle app, integrated with Tripleplay’s signage platform, to provide players with bespoke content such as schedules. Alerts and messages can be sent to their phones/iPads and to signage on training grounds.

Debuting next month is a fan engagement app. TripleSport Engage incorporates live video streaming with traditional app features like match stats, results, social media, league tables and standings. This solution incorporates the ability to create push notifications and messages, enabling the club or venue to share time sensitive special offers and promotions which can be either pre-planned or linked to proximity settings; meaning only those inside your venue receive them.

“You can achieve live interaction between fans and screens, for example, by asking users to vote for a man of the match,” says Keen. “If you go to a US sports game the sports is sort of a sideline to the day. Fans arrive at the venue two to three hours in advance and make a whole day of it at the site. In European soccer and rugby, clubs will get a two hour window if they are lucky to maximise revenue at the ground, so they are very keen on harnessing more of that time to attract fans to arrive early and to engage them while they are there.”

He continues: “Manchester City is an exception since it has a brilliant site (built for the Commonwealth Games in 2002) with fabulous infrastructure. It can and does attract fans several hours pre-game to enjoy live music, video and hospitality at the fan park. Other clubs are not as lucky so they are looking to up sell more promotions and concessions from content streamed to fans at the stadium.”

Tripleplay says it is developing a video delivery method that will make it “much easier” to deliver video over HD Wi-Fi in the challenging stadium environment.