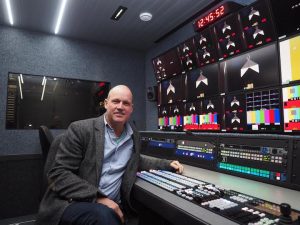 VE (Video Europe) Group comprises three operations – VE Hire, VE Crew and VE Live. VE Live brings together the outside broadcast and flypacks departments into one unit. From small powerful OB units to state of the art 18 camera double expanding trucks, VE Live regularly covers all kinds of jobs, including live sport, concerts, film premieres and entertainment shows. The scalable flypack solutions can be customised to handle anything from a small 4K production to full scale live sports broadcast and can be readily deployed anywhere in the world. Our Sit Down with Technical Director Richard La Motte begins with news of the latest vehicle in the fleet.

In December you launched a new OB truck. What makes it so special?

When Video Europe’s OB 3 went to South Africa for a series of long-term events it was decided to replace it with a medium-sized UHD HDR truck. This OB facility has a 3G and 12G layer, enabling a simultaneous HDR and SDR production signal path.

IP was considered, but for an OB truck of this size, it was not clear what the advantages IP would offer. Also, these are early days, and there is a great deal still to understand and implement UHD and HDR.

The main challenges were to find manufacturers which support 12G interfaces. Fortunately, SAM, Ross and EVS are now supplying 12G equipment. Any non-12G equipment, such as Sony 4300 camera channels, are gear-boxed to 12G using a Ross Ultrix Switcher

There is a lot of confusion surrounding HDR acquisition, so it is important that what appears on the picture monitors is understood. All monitoring in our new vehicle is 12G UHD and, more importantly HDR, supporting Sony Slog 3 and Arri LogC, PQ and HLG

Yes! We are in discussion with customers on delivering remote live production events. We have been looking at the Simply Live solution. There are three options [regarding] setting up for lower tier sports.

First, the Core Processing Hardware with PGM Output can be located at the venue and the User Interface location at a remote location. Here, of course, a 60mb/s sustained link is required.

Secondly, the ingest of ISO Feeds streamed – Real-Time Messaging Protocol (RTMP) – to remote location for production and PGM output, Here, the link speed is dependent on the defined quality and number of feeds.

Lastly, Simply Live has recently been validating cloud based processing. We have seen this in use by hosting the ViBox production application on Amazon Cloud and streaming directly to it from the remote ingest product located at the venue. The output from the cloud application is a PGM RTMP feed. This hosted approach is made possible by avoiding the use of proprietary dedicate hardware. 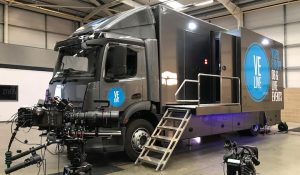 The latest OB facility has a 3G and 12G layer, enabling a simultaneous UHD and HD production signal path

By deploying remote ingest systems at the venues on a long-term basis, we will be able to select the relevant links – IP addresses – for the OB production quickly and easily. The main production can then originate at a central location. The advantage being significant savings relating to on site production staff costs, as well as reducing repetitive rigging costs.

IP is, of course, already well in place. But what do you see as the next innovation when it comes to this technology?

There is big growth in 4K UHD TV sales, so there will be greater demand for content. OTT services, such as Amazon and Netflix, can deliver 4K HDR and there are rumours that they may be interested in future sports rights. HDR can be applied to HD productions, so the take-up in sports may start there. Any new OB facilities built from now will have to support HDR.

360° production lacked delivery platforms for live streamed content until this year when it became available on Facebook and YouTube. This helped massively. Meanwhile, many developers have been busy focusing on creating applications for individual clients which allow the end-user to interact with the video, offering the viewer the choice of different camera angles, for example. As these applications begin to enter the market, we shall see more sporting events on our phones and tablets in 360°. However, the 360° video format is far more immersive when it is stereoscopic as well. So far, only the Nokia OZO can stream 360° 3D, but there are no widely available delivery platforms that can support this format. When there are, it will change the 360 market massively. Alongside 3D 360 and the release of the Microsoft Mixed Reality and Oculus GO headsets we shall see a big surge in the amount of 360° media consumed.

Is there a European-based case study that shows what you can do for a sports broadcaster?

Championship football for Channel 5 is an example of how to handle multiple coverage of numerous games in just one day. Maybe not so much a technical innovation, but certainly a good illustration of logistics.