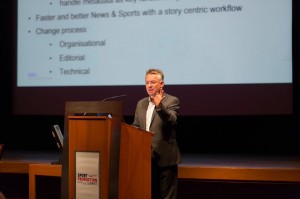 The latest instalment of SVG Europe’s busy schedule of conference events – the Sport Production Summit, held in Amsterdam on 11 September – attracted more than 200 people to hear about the latest developments in Ultra HD at several major sporting events, along with a sneak preview of what viewers can expect from the broadcast coverage of this year’s Ryder Cup.

Following introductory remarks by SVG Europe general manager Joe Hosken highlighting the extent to which the European side of SVG has expanded its roster of sponsors over the last 12 months, TATA Communications’ global business development director for media services, Richard Craig-McFeely, drew attention to the ongoing F1 Connectivity Innovation Prize – an innovative new contest that will award a grand prize of USD $50,000 to a winning team or individual.

In his scene-setting opening address, Dr. Hans Hoffmann, EBU Technology & Innovation Department, Head of the Unit on Media Fundamentals and Production, pinpointed the current and substantial “changes in consumer landscape and their impact on production” – not least the advent of an “overall connected media environment” which heralds numerous opportunities for viewers and production personnel. Challenges abound, of course, and these will include the successful optimisation of metadata and the ability “to extract content out of the mass of [available] information”.

Another milestone 2014 event, the Commonwealth Games in Glasgow, was the focal point for a subsequent panel session. Jeff Foulser, chairman of Sunset+Vine Productions, explained the background to the joint venture arrangement with Global Television that provided the host broadcast services for this year’s event. Meanwhile, BBC executive producer for Glasgow 2014 Jonny Bramley, BBC Sport chief engineer Richard Morgan and BBC R&D 2014 Coordinator Dr J.T. Zubrzycki discussed the deployment of drone-cameras to capture several sports during the Games, as well as the decision to incorporate a 4K component. In addition, Bramley gave an insight into the production planning for the next major event on his agenda – Rio 2016.

The scale and speed of 4K adoption remains a subject of conjecture – but there is no doubt that it is fast becoming a part of football workflows in particular. In a session moderated by OBS TV UK executive director John Hunt, Sony Professional Solutions Europe programme manager World Cup 2014 Mark Grinyer and FIFA Films head Paul Redman discussed the 12 Sony F55 camera-based infrastructure used to create the 4K live mix during a project that entailed intensive collaboration between FIFA, HBS, Sony and Telegenic.

Closing out the event – which attracted the largest audience to date of any SVG Europe non-UK summit – European Tour Productions head of production Tony Coxon and Sky Sports director of operations Keith Lane looked ahead to the imminent Ryder Cup and outlined what the high bar set for, in Lane’s words, “the iconic golf event” means for broadcasters and technicians.

More in-depth reports on Sport Technology Summit 2014 sessions will appear on SVG Europe in the next few days.