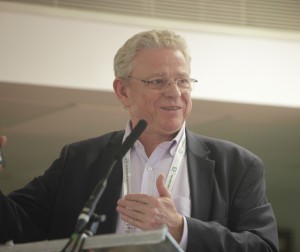 Geoffroy went on to outline some of the specially adapted vehicles used to carry the wireless systems technology, including motorbikes with customised Grass Valley LDX cameras and two onboard mixers, as well as helicopters and airplanes sporting auto-tracking receiving antennas, mast and auto tracking transmitting antennas, and positioning software.

He also explored the composition of the multipurpose truck positioned at the finish line, which is capable of delivering overall RF aggregation and coordination, including back-up, as well as standard production without RF – all contained within a modular workspace.

Among the many leading vendors whose equipment is involved in the production of the TdF, Avid is central to the post-production workflow, which makes extensive use of 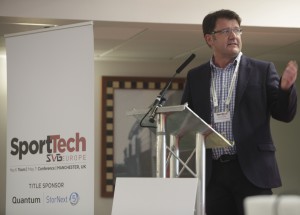 Avid | Interplay media production and asset tools and IRIS storage. The deployment of Avid’s Media Composer video editing software “has been an important asset to be able to find brilliant editors all around the world,” said Roberts, “whilst [effective] management of all the assets allows the highlights to be edited every day.”

Roberts also highlighted the contribution of Avid technology to the “continuity and preservation of metadata generated at all stages” – a component that “improves the efficiency and impact of edited packages”. There is also the possibility to send content to the main broadcast facility in Paris for the editing of content for weekly sports magazine programme Tous les Sports.