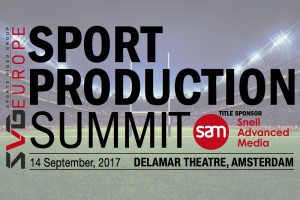 SVG Europe is delighted to announce the launch of the full programme and dedicated website for the 2017 edition of its Sport Production Summit. Traditionally the most well-attended event in the busy SVG Europe calendar – attracting nearly 350 delegates last year – the Sport Production Summit will take place this year on 14 September at a new venue: the prestigious DeLaMar Theatre in Amsterdam.

Devised to provide a illuminating and insightful prelude to IBC week, the Sport Production Summit has become SVG’s flagship European event, providing insights and reflections on a host of major tournament workflows and new technological innovations. For the first time ever, the conference will be followed by the Sport Production Awards, which will honour outstanding production and technical achievements in the field of broadcast sports.

Interspersed by special presentations by SVG Europe’s Platinum sponsors, the busy programme will commence at 1200 with registration and a networking lunch, and then proceed to sessions including: Preparing for PyeongChang: Winter Olympics 2018 Preview, featuring a panel of senior broadcast executives assessing challenges and probable innovations for the flagship events; Formula One Goes Ultra HD; Delivering OTT Sports Projects at Scale, with input from leading datacentre specialist Interxion, among others; a One on One conversation between Host Broadcast Services Chief of External Relations Lise Cosimi-Breant and EVS Chief Executive Officer Muriel de Lathouwer; an examination of the contrasting production approaches applied to coverage of NFL and rugby; and a look at the exciting trials currently taking place around Video Assistant Referee systems.

“We are excited to be presenting another far-reaching programme of technology insights and previews at this year’s Sport Production Summit. The fact that it will be taking place at the new-for-SVG venue of the DeLaMar – a beautiful and superbly-equipped theatre in the heart of Amsterdam – also raises expectations for what is likely to be a very popular event, so early registration is recommended,” says SVG Europe Editor David Davies.

Registration is now open at the dedicated, new-look site (https://www.svgeurope.org/sps2017/), where the full programme is also available. Further details of speakers will be announced in the coming weeks.