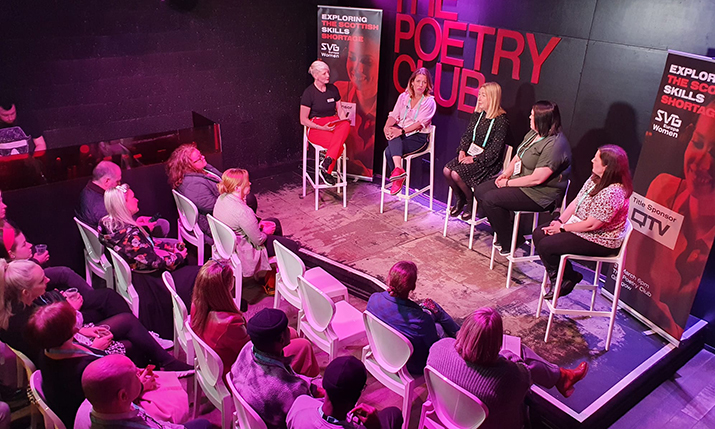 SVG Europe Women’s inaugural SVG Europe Women Scotland event was a resounding success, welcoming members of the sports broadcasting industry from around the country for an evening of discussion and networking.

The first in-person SVG Europe Women community event for two years took place at The Poetry Club in Glasgow on the evening of Thursday 31 March, in association with the Scottish production company and independent outside broadcast provider QTV.

Focusing on ‘Exploring the Scottish Skills Shortage’, the event began with networking followed by a panel looking at the pressing need for more crew for sports broadcasters – and a more diverse crew – in Scotland.

“The discussion dove into a lot of really hard subjects that nevertheless must be spoken about, and focused on by the sports broadcasting community.”

That was followed by a fireside chat between Stewart Kyasimire, managing director of BAME-led production company, Create Anything, and head of film and commercial BAME talent pool for people behind the camera, Reframe, in discussion with McLean.

‘Reframing the conversation to Create Anything’ saw Kyasimire explaining the goals and growth of Create Anything and Reframe as well as why it is crucial to give people of colour more representation behind the scenes in sports broadcasting.

McLean said of the evening: “It was fantastic to be in the room with new members of our community, thanks to the amazing support given to our initiative by QTV. The discussion dove into a lot of really hard subjects that nevertheless must be spoken about, and focused on by the sports broadcasting community – not just in Scotland, but across the UK.

“Being able to meet the women north of the border who are on the front line of sports broadcasting was brilliant. We hope to be able to continue to support and grow this network over coming years, in partnership with QTV and other sports broadcasters in the region,” McLean added. “I can’t wait to go back!”