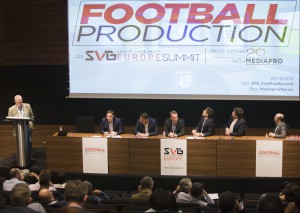 An illuminating programme of single-speaker and panel sessions included: an insight into production and technology for coverage of La Liga; a case study on Berlin 2015 UEFA Champions League and DFB-Pokal Finals; two sessions on the changing nature and economic factors influencing match-day production; a discussion of the latest techniques being brought to bear on studio-based content; a pair of sessions on Mediapro’s technical services and sports analytics innovations; an examination of the implications for the fan experience of the ‘connected’ stadium; and a special preview of FIFA and HBS’ preparations for the 2015 Women’s World Cup.

Reflecting on a successful event, SVG Europe general manager Joe Hosken comments: “Medipro provided a great venue and an even better partner for SVG Europe to host the fourth Football Production Summit. The international conference programme and strong local turnout ensured that this was a thoroughly rewarding day and consolidates SVG Europe’s commitment to hold its events in the major sports production cities of Europe.”

Mediapro’s operations director, Emili Planas Quintana, adds: “Football and everything surrounding the sport at an international level have been part of the know-how of Mediapro since it began more than 20 years ago; everything from rights management to broadcasting, including production and signal distribution. The SVG Europe Summit has allowed us to share some of this know-how and to combine our knowledge with that of more than 150 professionals from the sector, providing us with an excellent opportunity to weigh up the latest industry trends.”

Full reports on individual sessions will appear on SVG Europe over the next few days.