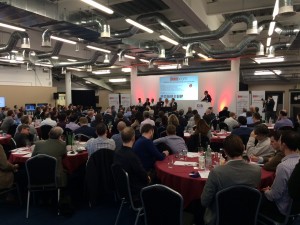 Olympic Broadcasting Services CTO Sotiris Salamouris was a primary contributor to two key sessions. In the first, he documented the extensive work now taking place to create the IOC’s forthcoming Olympic Channel, which is designed to maintain ‘the Olympic spirit’ inbetween tournaments. In the second, he was joined by BBC Sport executive producer major events Jonny Bramley to discuss preparations – now at full-tilt – for the 2016 Olympic Games, which will take place in Rio.

The various practical implications of High Dynamic Range and the need to define precise parameters of operation were the subject of a fascinating session entitled ‘HDR: Separating Hype from Reality’, whilst the advent of increased online content and greater in-stadium interaction constituted major talking points of the Rugby World Cup panel, ‘The Year Rugby Really ‘Got Connected’.”

The day closed out with a thorough examination of the groundbreaking Sandbox+ live IP TV studio project, and a look at some of BT Sport’s most recent 4K UHD productions.

As ever, the summit included a detailed site tour, lunch and networking opportunities. SVG Europe would like to extend its thanks to the sponsoring companies who made it all happen, namely title sponsor Blackmagic Design and event sponsors ChyronHego, Limelight Networks, Quantum and SIS Live.

Full reports on each conference session will appear on SVG Europe during the next week.

The next SVG Europe conference event will be Sports Venue Technology Summit, held during Integrated Systems Europe in Amsterdam on 11 February. For more information, and to register, please visit https://www.svgeurope.org/svts-europe-2016/.