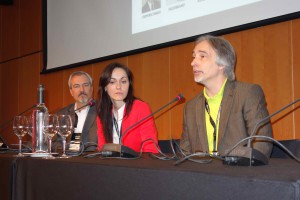 Close to one hundred people attended the second annual Sport Facility Integration Summit, organised by SVG Europe in collaboration with leading audio consultant Roland Hemming. Taking place at the Amsterdam RAI during ISE on 12 February, the event addressed the intrinsic challenges of venue development projects, the convergence between AV and IT, and the changing face of the sports stadium.

After a scene-setting introduction from Hemming, the RH Consulting founder proceeded to address the core stages involved in creating and completing a new sports venue. Integrators, he warned, should be aware that timescales can be the subject of considerable change – necessitating a continual search for work that will help plug the gaps in the schedule. They should also be prepared for significantly different operating cultures from project to project.

In the first panel session of the day, Venue Strategies design director Sam Wise and AVI-SPL senior VP international sales special projects group George Douglas mulled the changing role of the stadium consultant. The sometimes unpredictable nature of the dialogue between the consultant and other stakeholders was among the themes of the session.

For the next part of the summit, Cisco manager business development Paul Depperschmidt, ALC NetworX senior product manager Andreas Hildebrand and ColosseoEAS sales director Lenka Kunecova discussed the rise of increased convergence between AV and IT systems. Among other points raised, it became clear that there is still a divide between IT and AV professionals to be addressed, and that there are considerable technical and logistical challenges in delivering a successful integrated network infrastructure.

The All England Tennis Club (home to the Wimbledon Championships), Lord’s Cricket Ground, Twickenham Stadium and Amsterdam Arena were among the specific projects recalled by an all-star integrator panel comprising RG Jones sales and installation representative Jon Berry, Sales-All director Mark Kocks and RG Consulting principal Richard Northwood. Increasing demands on a facility’s network set-up and the need for all stakeholders to consult each other from the earliest stage of a project were among the session themes.

Wrapping up the half-day summit was a visionary keynote about the future of the sports venye from Dimitri Huygen, who in addition to heading the European Stadium and Safety Management Association (ESSMA) is now involved with running the EURO2020 stadium bid in Belgium.

Full reports on each Sport Facility Integration Summit session will appear on SVG Europe over the next few days.