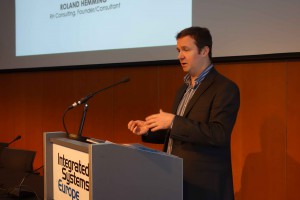 Long before a match is played, the broadcaster turns up or the spectators come into the picture, a stadium has to be built. Construction and development involve the integration of a wide variety of different technologies, often in a series of overlapping stages. At SVG Europe’s Sport Facility Integration Summit at ISE Amsterdam, Roland Hemming, RH Consulting founder, took us through stadium build issues and how audio, video and IT personnel interact to deliver their part of a new stadium infrastructure.

“In order to have these amazing events you need a stadium to put them in! I’m involved with the design of audio systems and the project management of those things,” said Hemming. “I want to talk about what makes a stadium. Often they are many years in development, sometimes a decade. These things work in phases.

“First there’s a planning stage, where an architect gets involved and consulting engineers put together master plans. Then there will be a detailed design period, where many more things get put in place. Then of course there’s the construction phase, followed by installation of secondary things and then the commissioning phase to try to make all the systems work together, staging test events and sometimes getting sample crowds in to examine the experience and so on. And finally, there’s the operational phase.

“In order to plan anything, you really have to follow the money,” he said. “Quite often a stadium will have an enabling development. This could be the sale of land, or the building of a hotel. Sometimes it will be funded by a major event such as an upcoming World Cup or Olympic Games.

“Sometimes there is a change of use; an example is Wembley Stadium in London which is starting to regularly stage NFL games; these are presented quite differently [to football]. So there’s going to be a complete change in how the technologies work there in the next few years.

“A ground close to my heart is Lord’s in London, the home of cricket. It’s quite a traditional place – but it now holds these matches called 20:20s which are the length of football matches. In recent years we’ve been doing a significant upgrade to the audio for those events, to create a more rocking atmosphere, which the traditionalists hate – apart from the money! It’s bringing a new set of people into cricket.”

“During the construction phase quite often you’ll have a main contractor, a building firm, doing the work,” said Hemming. “And then things will be subcontracted to others who manage packages of works, and below that there will be specialist contractors.

“From my point of view, the subcontractor will employ us and that subcontractor may be doing the IT, the fire systems, security and the AV. And we’re just one bit of their whole package. And even then, the AV may be subcontracted further into video and audio contracts.

“And finally sometimes there will be a project management firm that sits alongside the contractor. There will be a line in the sand drawn between what’s known as the shell and core of the building, and then the fit-out. Sometimes the construction firm will just do the shell and core and then a project management firm will be brought in to manage all the other things from the plumbing to the AV to broadcast connections. I’ve been in quite a lot of situations where that’s happened on new-build stadiums.

“The builders are always late,” he observed, “but of course our deadline never changes and our work on the technology side is always compressed. People will get thrown at it [to finish the job], and they may make a lot of money or lose a lot of money depending on how they’ve negotiated their contract.

“The killer, in terms of time and cost, is change,” said Hemming. “Really, once you go into the installation phase the last thing you want to do is change anything at all, if you can possibly avoid it. That introduces delays, and as I’ve said the builders will always delay you — and you can’t hang bits of technology on walls that haven’t been built yet. It’s a huge issue for us.

“Changes sometimes come in the form of variation orders or compensation events. Then you have restocking fees: they might change from a 50-inch to a 55-inch screen and you can charge for restocking it. And accelerated works – this is amazing! God forbid they ask you to work out of hours. This hikes up the cost hugely, and this is why there are sometimes scandals about the rocketing costs in stadia – it always comes about because somebody either was delayed or changed their mind.

“Testing of everything is obviously critical, and sometimes it’s a legal requirement. Often the stadium audio system is also the life safety evacuation system and it’s a legal requirement: you cannot open the building without that certificate. So suddenly this tiny thing that was one of 700 lines in a contract becomes a very big thing because you can’t open the doors without it,” he said.

From construction to refurbishment

“Finally, the client arrives, who hasn’t seen any of this, and says ‘well this isn’t what I need’! Sometimes you’re called back, or the broadcaster discovers they didn’t build the stadium big enough to fit the broadcast trucks … it’s incredible how frequently this stuff happens,” said Hemming.

“I believe it’s very difficult to produce a perfect result in the construction environment. If you’re working directly with a client on a refurbishment that’s different, it’s more negotiable. When the client comes in and faces things that aren’t right, it’s not easy to change because they’ve just spent several hundred million dollars building it in the first place.

“Once the embarrassment fades, now is the time to go to the board with changes. It’s quite common to see a major upgrade five to seven years after a stadium opens – and sometimes it’s just a question of bedding in. It can take a few years to fully understand how to operate the venue.

“And of course the client won’t refurbish everything at the same time: they’ll do IT one year and video the next and so on. No more than one or two disciplines tend to change in one year – as they’re trying to run a venue.

“This work is normally cheaper, because you don’t have those multiple tiers of contractors, each making their percentage. Some of the better stadiums are where the client has gone through multiple refurbishments and is well established. I would say a good example of that is Wimbledon; they manage things very closely themselves and it’s just one of the finest sporting venues around. They have carefully nurtured it for many years,” he said.