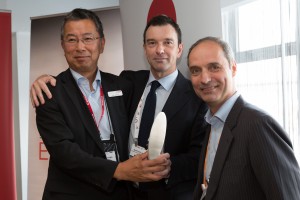 Canon Broadcast’s Ken Koyama (left) presents to Mark Wallace and Sotris Salamouris of the OBS for their work on the Sochi Winter Olympics. [Image: Erik Verheggen]

SVG Europe closed out an exciting Saturday (13 September) at IBC with its annual Sport Production & Technical Achievement Awards ceremony at the RAI in Amsterdam. This year’s awards celebrated the best in global live sport production, and – in many ways – the three honourees were easy selections.

During the event – which attracted nearly 250 people – Olympic Broadcast Services (OBS) and FIFA TV and Host Broadcast Services (HBS) were recognised for Production Achievement for their work on the Sochi Winter Olympics and the FIFA World Cup, respectively.

OBS covered the Sochi Games from torch to torch with tremendous ability, offering viewers greater multiscreen coverage of countless events, all while producing at an elite level. Head of engineering & technical operations Sotiris Salamouris and Head of Production Mark Wallace were on hand to accept the award.

“It’s a huge, huge team effort,” said Wallace. “Thanks to all of the people, not just the OBS people but the people we bring in — up to 3,000 people. It’s really the effort and determination and dedication of those people who make the pictures on the screen what they are.”

The production of the FIFA World Cup in Brazil was a monumental effort viewed by billions of people across the globe. FIFA TV and HBS teamed up to produce games and surrounding coverage of the four-week spectacle.

“It’s so important for us to stay in the forefront of delivering things to football fans,” says Nicolas Ericsson, FIFA TV director, “and it’s equally for us in the TV division to continue to have the enormous support we have from the president of FIFA because they really find the money to invest in what we are doing.”

Ericsson’s colleague, Dan Miodownik, was also on hand to thank the giant production crew that made the most successful soccer production to date possible.

“As the pesky Germans showed us, it’s about teamwork, and we never would have been able to do this without the help of a great number of people and a great number of companies,” said Miodownik, director of production at Host Broadcast Services. “Seriously, we can’t do this without you. It’s the work that we do in the years preceding the event; it’s not just the five weeks of event time. That’s what you see on the screen, but it’s the preparation that’s so key to this.”

Sportvision was given the Technical Achievement Award for its groundbreaking virtual-graphics implementations and date tracking on the production of the 2013 America’s Cup.

“Everyone who saw it in our business must, like me, have gone How the hell did they do that?” said Peter Angel, COO at IEC in Sport and chairman of SVG Europe, who accepted the award on behalf of Sportvision. “It’s a very unique situation when that happens in our business. We’ve all seen it all and done it all, but this was really something special. The words game-changer, I think, are used far too much, but this was really a game-changer.”

The Sport Production & Technical Achievement Awards 2014 was sponsored by Canon.