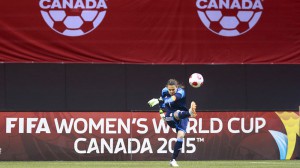 FIFA TV’s HD production plans for the 2015 FIFA Women’s World Cup and coverage of the event, which begins on 6 June, promises to be the richest and deepest production ever for a non-men’s FIFA event. “The FIFA Women’s World Cup is now one of the biggest sporting events in the world and we have great networks that will be covering the event in prime time,” says Niclas Ericson, director of FIFA TV. “So we will be able to showcase the best of women’s football with this commitment. It makes commercial sense and women’s football deserves the best.”

The event is destined to be a ratings winner everywhere as much of the European TV market will televise matches in primetime and the lack of time-zone challenges in North and South America mean no need for early morning wake-up calls.

Among the enhancements to this year’s coverage versus are five international production “dream teams” working with a minimum of 20 cameras for all matches and up to 12 cameras of multi-angle content via EVS C-Cast for multi-screen applications. Additional new features this year include FIFA TV ENG crews based in six cities; an additional content channel; and Match Day -1 coverage to give rights’ holders more access to content the day before a match.

“It is important for FIFA to continue make sure the event grows, and it helps broadcasters to continue broaden their coverage of the event, not only during matches, but also to create great build up content and post-match features,” explains Ericson. “It is also FIFA’s commitment to make sure material is available to serve the football fans around the world with stories and features around the event. It helps our broadcasters to have a complete coverage of the event.”

Key to this year’s coverage is the “dream team” concept, whereby the production teams are formed into five teams that work together through the entire tournament. Top football directors, including Grant Philips, Laurent Lachand, Wolfgang Straub, Thomas Sohns and Jamie Oakford, are currently expected to be part of the production and at the head each team. The advantage of the team concept is that it allows the team to become more familiar with each other’s style of production while also embracing the FIFA multilateral coverage philosophy and production guidelines.

The standard coverage plan includes four hard cameras on the upper tier capturing the majority of the match along with another hard camera shooting from the upper tier behind one of the goals. A robotic beauty camera is opposite that position and two additional robotic cameras are located alongside the four primary match cameras and lined up along the two end lines behind the goals. The lower tier, meanwhile, has a hard camera shooting a reverse angle while the pitch level has a hard camera at midfield and another on the reverse side, hard cameras behind each goal (two on one side and one on the other), POV cameras in each goal, and two Steadicam cameras. There are also two handhelds on pitch level; one behind a goal and the other for flash interviews.

The enhanced production plan – for the opening match, semi-finals and final – adds a helicopter shot, a wired aerial camera system, and an additional pitch-side hard camera.

The need for more content around major sporting events like the women’s World Cup has FIFA TV and HBS producing an additional content channel that will have programming beginning 150 minutes prior to the first match at a venue (there are doubleheaders for the first round) and 60 minutes after the last match. Content includes team arrivals (both live and on replay), live press conference coverage, clips compilation during the match (including ultra slow-motion), and additional match related content.

“We believe it is important to enable broadcasters to produce more features, trailers, etc. during the event,” adds Ericson. “By offering this service, we facilitate such production.”

As is always the case for a large global sports event, much of the production work will take place at the IBC that, in this case, will be located in Vancouver. The size this year is 7,500 square meters, more than double of the 2011 IBC. There will be more than 300 staffers, 120 host broadcast staff, and seven broadcasters on site at the IBC.

Like at last year’s World Cup in Brazil the FIFA server system will play an important part in the storytelling and content creation process. All match feeds and ENG content (as well as training footage, interviews and press conferences, 10 minute highlight packages, and even music montages) will be logged and available via onsite browsing using EVS IP Director and transfer via Gigabit Ethernet. Offsite browsing of non-match footage is also available.

“Canada is a large country and we want to be sure broadcasters who need content has an economically viable option to access more material,” says Ericson of the ability for remote access.

Multimedia services will also play an important role as multi-angle content will be created using EVS C-Cast and then bundled together via a syndication station. Video on demand content will also be available alongside historical content like the best moments and goals from past World Cups. Also look for enhanced statistics from Deltatre.

“The actual use of content is also increasing with new technologies including second screen applications which further justifies this kind of service,” says Ericson.

More details on the event, including additional services, will be announced in the coming weeks.