A new day in virtual advertising and potential for new advertising revenues is dawning thanks to Viz Eclipse, a new system that will be previewed at IBC this weekend and does not require any physical camera or board installations on site. “This new product from Vizrt lets sports rights holders and federations globally monetise their content,” says Stephan Würmlin Stadler, EVP Sports for Vizrt. “Televised sports will always be a live commodity and Viz Eclipse allows targeted, regionalised advertisements to be added to live games in an unobtrusive way.” 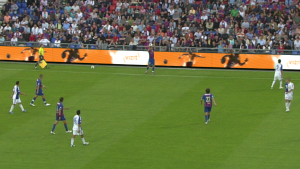 “We believe that this has great potential to create new revenue streams for sports rights holders,” says Würmlin Stadler. “According to surveys, brand recognition on video boards by far surpasses traditional commercials and of course also surpasses static boards or pitch-side carpets.

Würmlin Stadler says Viz Eclipse works similar to Viz Arena as an incoming SDI camera feed is taken into Viz Eclipse and Viz Eclipse then tracks the camera in real-time, mapping the camera to the field of play.

“Sophisticated keying data is also generated within Viz Eclipse,” adds Würmlin Stadler. “The keying data is used to replace the physical advertising boards with new virtual ads, by taking into consideration the players, referee and linesmen that walk or run in front of the boards.”

Viz Eclipse then shares this meta-data with one or multiple Viz Engines. The final composite of the new feed is produced on the Viz Engine using the Viz Eclipse metadata. Using Vizrt’s advanced keying techniques, the ads appear natural in the background and behind the players, allowing freedom of camera movement.

“With one core Viz Eclipse system you can handle the basic incoming camera feed and one outgoing feed. Multiple regions are then served by simply adding more Viz Engines,” says Würmlin Stadler. “With the capabilities of our multi-channel Viz Engines, you can serve multiple regions out of one workstation.”

Players and officials can walk in front of keyed adverts without interruption to the layered insertions. Viz Eclipse can be applied to non­-unicolor backgrounds, such as LED boards, and rendering filters allow for seamless blending of virtual signage with the stadium’s environmental conditions.

Viz Eclipse is currently compatible with soccer and can be applied to footage recorded from any stadium with perimeter advertising boards. It doesn’t need any alterations to the boards themselves and requires minimal overhead to TV production workflows.

“The system is targeting perimeter advertising boards in general.,” says Würmlin Stadler. “The crucial point here is that up to now, all solutions targeting this application required physical adaptations to the boards themselves to be able to track them and key the players in front of them.”

Würmlin Stadler says that, in theory, the system will be able to allow for downstream usage as it uses the same tracking technologies as Viz Arena. Viz Arena is able to add virtual ads on the field or court downstream in the broadcast center. However, at this point in time, the system would need to be placed at the venue.

“The footprint, however, is very small as it’s one or a couple of workstations, with easy setup of less than one hour and no adaptations are needed on the physical advertising boards,” he adds.

“We foresee Viz Eclipse to be used mainly by the rights holders themselves, clubs, associations, leagues, when they want to monetize their international audiences, basically generating multiple versions of the same international signal,” says Würmlin Stadler. “Viz Eclipse will give them a great tool to replace the field-side boards with regional sponsors, thus potentially giving them additional streams of income. It’s similar to what the NBA achieved with Viz Arena and the insertion of on-court virtual ads for their Chinese fan base. With Viz Eclipse, we’re just taking this one step further, giving the rights holders the ability to not only add new ads on the field or court, but also replace ads in a very smooth and non-intrusive way.”