SVG Football Product Summit: being everything, everywhere, every time for multi-screen 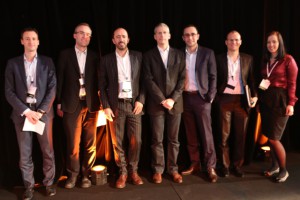 The multi-screen experience for football fans continues to evolve but, as laid out during a panel discussion on the topic at last week’s Football Production Summit, while it may seem to add a layer of complexity to rights deals, operations and more, the core concept is actually fairly simple.

“It’s about being on everything, everywhere, every time, and reaching the point where you want to increase the experience [for fans],” said David Collet, Opta, director France.

That means giving them the opportunity to step away from a TV set and still be tuned into a match.

“Clearly, if broadcasters don’t want to lose their audience they have to adapt,” said Nicolas Bourdon, EVS, marketing and communications director. “And our technology has adapted as only 10% of the content recorded on our [replay] servers is used on a daily basis. So that means 90% of the content is not used and that is the challenge for broadcasters. How can they use it to meet the requirements of the audience of tomorrow?”

For EVS that has meant the development of C-CAST, a technology that allows multiple camera angles of specific events to be published to a tablet application. Viewers can then choose different angles with literally the touch of a finger.

“What we want to avoid is creating a second-screen production environment that multiplies workflows,” added Bourdon. “Broadcasters need to monetize the existing content.”

But before applying that technology the broadcaster needs to change the production process to keep the second screen experience in mind from the very beginning of planning.

“The limitation today is that the broadcast is still designed for the first screen and there is a need for a more holistic approach where different content is created for the different channels,” said Carlo De Marchis, Deltatre, CTO. “If you’re on a digital [mobile] device you don’t need 4K.”

Henriette Sæther, Vimond, director of marketing and communications, says that Vimond has helped events like the Tour de France and ice hockey take that approach. She explained that a single ecosystem can ensure the content that is best suited for the mobile phone screen hits those devices while content optimized for tablets takes advantage of the larger screen. It can also allow for more flexibility in addressing changing needs as new social networking applications quickly pop up and become market forces.

“When talking to my 15-year-old nephew they say ‘my mom is on Facebook’ and they use Snapchat or Instagram and even have their own blog,” she added. “There is a big need to interact but they also want more video, more highlights, more statistics, and a lot more content.”

Another company that is looking to help ease that production burden is Netco Sports Group, a designer of sports-related apps. “It’s not just about throwing content on a wall and hoping it sticks,” said Christopher Rapaport, Netco Sports, consultant. “It’s our job to be wise and help the broadcaster identify the content that will stick and have content for a match on Sunday carry over to applications the fans use on Monday to add value.”

Rapaport added that it’s not just about video feeds but giving fans the type of statistics that are typically only available to journalists and coaches (this is something the National Basketball Association in the US did with its site statistics).

“The second screen is dangerous because it can take the attention away from the TV screen so there needs to be some interaction between the TV and the tablet [experience]. So the tablet has to give the opportunity for additional rich content and social networking, not just one or the other.”

Richard Craig McFeely, TATA Communications, business development director, said that geolocation is another important feature that needs to be considered. And then there are the opportunities to reach fans in developing countries.

“India has a huge population and they are going from having no technology to smart phones,” he said. “And Brasil, with the World Cup, is a whole market that will be ideal.”

De Marchis predicted that by 2020 the online viewership of events would bypass traditional TV deliver and that what may be considered the first screen today may not be the first screen of the future as things like the Airplay feature on Apple TV allow for content delivered to a tablet or phone to be put on the big screen.

“One thing I can says is that need to take 50% of the budget you have for your Web site and put it into mobile and social networking development.”