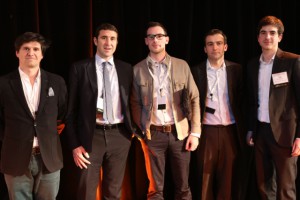 Leading football Federation representatives from Premier League, Bundesliga, and La Liga took to the stage alongside club representatives from Arsenal and AC Milan to discuss the changing technology and production landscape and challenges in the ever-evolving age of digital during last week’s SVG Europe-organised Football Production Summit. And while the sport of football may be relatively the same for nation to nation how it is produced, the level of player access available to both new and old media, and more can vary vastly.

For example, while the Premier League leaves it the rights holders to make their own decisions on production and distribution MediaPro, which handles La Liga production, owns the rights to the clubs and sells them to the broadcasters. And Sportcast, a subsidiary of Bundesliga formed in 2006, produces the world feed and a clean feed for both Bundesliga One and Two leagues.

The challenge today is figuring out how social media platforms and non-traditional video delivery to tablets or phones will evolve and impact the traditional TV viewing experience.

“It gives fans a voice and the players a link across a global fan base,” he said. “It gives a sense of engagement when you can debate an issue with a fan in America live.”

“We are now making cross-platform marketing campaigns to promote the club websites and improve fan relationships,” he added.

Tim Achberger, Sportcast/Bundesliga, executive assistant, explained that the goal is to produce as much content as possible, whether at the club level or the national broadcaster level.

“Our national broadcasters are involved a lot in new media and are using platforms to reach customers,” he said. “And as a league we want to identify more and more the international fans.”

That latter effort led to the creation of Digital Sports, a new company that provides international markets with Bundesliga content for digital platforms.

“They want high-quality feeds and we will start with a YouTube channel that is more visible to international fans,” he said.

The Premier League fans are also hungry for live programming and other technologies, like player tracking that uses data from Opta, is vital in telling the story of Premier League matches. And then there are enhancements to the on-air TV product.

“We are also looking at virtual advertising,” said Morgan. For example, by changing the interview backgrounds to a sponsor that is more relevant for a broadcaster in a given market opens up new revenue opportunities.

“We are constantly improving our basic feed,” added Achberger. “We are testing things and definitely want to meet the expectations of everyone by delivering a high premium product.”

Football clubs also find themselves grappling with a rapid pace of technology development on the fan side that requires vigilance in making sure fans are connected to the clubs via not only established social media brands but also up-and-coming ones. And then there is also the need to help the players control their exposure and personality.

“Players are more and more aware of themselves as a product and the challenge for us is to syndicate to player websites where they might work with sponsors like Puma or Nike but then also they will talk about their own website instead of ours,” says Petro Mynch, Arsenal Broadband, production manager. “And we’re Arsenal, not a player, so we are careful when using players to engage worldwide as we do not want to make a player bigger than the club. And that is a challenge.”

Giuliano Giorgetti, AC Milan, head of web and new media, agreed and added that digital technologies are changing the culture inside AC Milan as it becomes a real entertainment company rather than just a football club.

“We need time to find the right way to manage the image of players who now have their own Twitter account and social media presence,” he explained. “It’s not so easy to manage them outside of a training session.”

Overcoming the challenge of working with players requires monthly meetings to help them understand how to build their profile with media.

“It is very different than it is in America where players are schooled from an early age on how to be a media entity,” said Mynch.

Another difference between America and Europe? “If the player is spending too much time on screen and they aren’t performing on the pitch the whole thing could be shut down before it even gets off the ground,” added Mynch.

But the changes and challenges are here to stay.

“Digital is driving the innovation,” he said. “We own the content and the players and fans want access to the players. So we are finding the right balance in our culture and organisation while with broadcasters we are finding the right balance between rights and innovation. And our supporters are using YouTube and we are thinking a lot about content and exclusivity.”

Probably the biggest change has been how digital and social networking technologies have allowed fans outside of a club’s local area to follow players and the team. Different platforms in Asia, Africa, and North and South American have allowed millions of fans that otherwise would not be able to follow the exploits or Arsenal or AC Milan a chance to be engaged on a daily basis. Clubs need to cater to a wider fan base that not only speaks different languages but also is in vastly different time zones.

Arsenal, for example, creates two international programme blocks in HDTV that are syndicated to 130 countries and about 160 million people. And then there are online opportunities, with about 70% of the content available online being different from the TV product.

“Online content is much more relaxed and fan oriented,” he said. “We do about 300 hours of content a year.”

Giorgetti said AC Milan does not produce its own content and the focus is on taking content from the Club TV channel and uploading it to the Web and social media sites. Fans also contribute content.

“The best content is from phones as it is spontaneous content and can be distributed one second after being created to social networks or digital platforms,” he added.