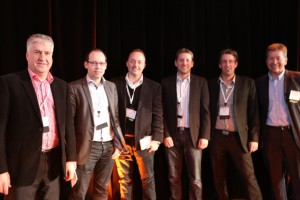 Graphics experts from a number of manufacturers took to the stage at the second-annual Football Production Summit at Stade de France in Paris to discuss their latest product offerings and trends among users and customers. And while the consistent message could have been one of “buy my product” it was instead a robust discussion on getting the most out of existing tools by using them to tell stories and not simply add sizzle.

“Graphics, if overused, can become gimmicks,” says Ian Wray, Hego, group sales director. “But if they are used for editorial needs they can add value and insight, and that is what graphics are used for: to provide better insight into the game. The use of data and supporting graphics that makes sense is what we are all about.”

“The goal is to add value to the production and not drive the production,” he adds. “We also need to shift the use of virtual graphics closer to the event,” he says of a workflow that has historically left virtual graphics that diagram a specific play to a halftime or postgame-only time frame due to the amount of time it takes to process the video and graphics.

Mike Ward, Reality Check Systems, head of EMEA Operations, adds that the common thread for all football graphics is storytelling. And the tension within the football production community is often between broadcasters who would like to use more graphics to tell the story of a football match and federations that often are more conservative in the use of new graphics.

“Graphics are about engagement with the players and creating a connection,” adds Ward. “And you can now make a graphic look however you want and there is more data than you can use but how do you use it to tell a story in a way that fits into the production workflow?”

Part of that workflow includes making sure the talent can make sense of the graphics and also be able to interact with them in a meaningful way. Stephan Würmlin Stadler, Vizrt, executive vice-president, sports, says that virtual graphics for analysis should support the points made by talent. And more than ever, adds Stadler, it is important to make those graphics available to the talent as quickly as possible.

Ofir Benovici, Orad Hi-Tec Systems, vice-president, marketing, concurs, adding that telling a story with graphics 10 minutes after an event happened is not relevant.

“We need to spend effort making our tools more efficient and easier to use so that we can help the analyst in 10 seconds, not 10 minutes,” he adds. “That is something we are all facing and trying to achieve. And the increases in computing power helps us achieve that.”

The real endgame with virtual graphics, however, is opening up potential revenue streams via virtual advertising and sponsorship of the graphics.

While graphics devices for the big screen are focused on virtual replays and virtual advertising (and of course display of traditional stats, scores, and names) there is a burgeoning market for second screen applications.

“The second screen is an interesting area that is in its infancy,” says Paul Glasgow, Chyron, VP sales EMEA. “But the focus is to enable second screen and social media graphics at no cost and with no extra people having to do it.”

Wray adds that the goal of second screen graphics is to provide information that otherwise would have not made it in front of viewers.

“You don’t want to complicate the main viewing experience and tablet devices can provide stats while the viewer watches the main output on TV,” he says. “And all of the second-screen tenders we see also have some form of social media involved as it is important to engage with the fans and viewers.”

Stadler says he dreams of giving viewers the ability to do their own virtual graphic analysis, bringing a completely new level of interactivity to the fan.

“Imagine watching analysis of a controversial play and creating a feedback loop on screen that allows viewers to build their own virtual analysis, tying the first and second screen together,” he adds.

“How can we bridge the gap between the first and second screen? With graphics as you can interactions between the two screens,” adds Benovici. “You can see answers on the first screen to polls taken on the second and vice versa. And that puts all of us in an interesting position as gate keepers. We will see how it goes but it is a unique place to be.”