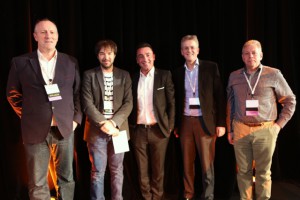 3D, 4K or super-slo mo… whatever the technological trend, the chances are that football – arguably unrivalled in its appeal across ages, nationalities and territories – will be a primary agent of change. The latest developments in next-generation acquisition and distribution systems came in for further scrutiny during the penultimate panel session at last week’s SVG Europe Football Production Summit.

With some critical murmurings already suggesting that the 3D boom may be over, there was some discussion as to the extent of its role in football’s technological roadmap over the coming years. As 3D operations and development manager for BSkyB, Robin Broomfield understandably rose to the form’s defence, emphasising that he was still “very keen on 3D” and was immersed in ongoing, “highly challenging work” to optimise its use for the sport. “It’s very much still a going concern for us,” he added.

Berti Kropac, managing director of Kropac Media, appeared more enthused by the possibilities of 4K. Having experienced it in multiple scenarios, he said that “4K is so good I don’t require the 3D effect”. He nonetheless held out the possibility of the two trends becoming intertwined. “Might we might not see 3D and 4K converge at some point, ie. 4K 3D without glasses?” he asked, rhetorically.

Throughout the session – throughout the day, in fact – the impression of an unstoppable momentum behind 4K was difficult to shake. Stephan Dery, Canon France Professional Imaging Group director, alluded to the recent first stage approval (announced on 25 January) by the ITU to the HEVC (High Efficiency Video Coding) video compression standard. Under development as ISO/IEC 23008-2 MPEG-H Part 2 and ITU-T H.265, H-VEC will support 8K UHD and resolutions up to 8192 x 4320.