SVG USA’s IP Production Forum in New York City on October 6 was highlighted by a discussion concerning the current and future state of IP standards, one of the key issues facing a broadcast industry willing to embrace IP but hungry for equipment interoperability.

All the representatives shared their thoughts on the options available for those looking to do IP as well as on advances related to greater interoperability. For example, Sony’s NMI IP interface, which debuted in 2014, delivers low-latency, noise-free switching of HD and 4K video, audio, and metadata as part of IP-based networking. NMI packetizes video, audio, and metadata, enabling real-time transmission between video-production products via standard network infrastructures.

ASPEN was developed in 2015 to meet the real-world requirements of an IP-centric facility while leveraging proven MPEG-2 TS standards, via a robust format for encapsulating uncompressed UHD/3G/HD/SD over MPEG-2 transport streams (TS). When combined with existing SMPTE standards — such as SMPTE ST 302 (audio over TS), SMPTE ST 2038 (ancillary data over TS), and the SMPTE 2022 family of IP standards — ASPEN provides broadcasters with a flexible method of transporting video, audio, and data over scalable IP networks.

Also introduced in 2015 was NewTek’s NDI, allowing multiple video systems to identify and communicate with one another over IP and to encode, transmit, and receive many streams of high-quality, low-latency, frame-accurate video and audio in real time. 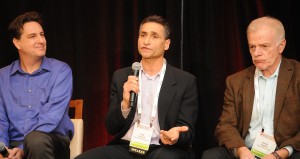 AIMS, which comprises companies dedicated to putting to use open standards based on the roadmap established by SMPTE 2022-6, VSF TR-03, and VSF TR-04 to solve the basic challenges inherent in using IP technology for broadcast operations. These guidelines are built on the foundation of work done by the Video Services Forum (VSF), the AMWA, the SMPTE, and the EBU.

The goal of AIMS is to get support for SMPTE 2110 as the standard is expected to be embraced by all manufacturers in the industry. SMPTE began work in January to develop a set of standards specifying the carriage, synchronisation, and description of separate elementary essence streams over IP for the purposes of live production, based on the VSF Technical Recommendations TR-03 and TR-04.

TR-04 is a technical recommendation to use SMPTE 2022-6 for video with embedded audio and AES67 for separate audio streams, the latter a standard already supported by many vendors. And TR-03 takes a real essence-based approach (where each signal type is transported individually but with synchronization information). This approach is better suited for a production environment than a composite approach is because, for example, it makes audio processing much easier since no de-embedding and re-embedding is required.

All the participants pointed to the wide-ranging support that each of the various interfaces have found in the marketplace, a result of market dynamics that encourage manufacturers to support the different IP interface options in order to ensure that their products can be put to use by the widest number of customers.

But the current IP landscape requires the use of IP gateways not only to allow different IP interfaces to share signals but also to enable baseband signals to be integrated as well. The gateways for IP-based workflows to work as needed, and, more important, the end user never knows that the signal is moving from one IP format to another. Part of the reason for the move to the upcoming SMPTE 2110 standard is that, eventually, it will remove the need for gateways and with it issues related to latency and cost.

“But that future is two years from now,” noted Gaggioni. “Customers can’t wait two years [to move to IP].”

Fankhauser agreed. “[A gateway is] a demarcation device that can allow baseband signal in for formatting to IP and then into the network,” he explained. “So, while 2110 is in development, a gateway device will be required.”

Of course, one of the interesting aspects of the current IP ecosystem is that gateway devices are not needed for working with equipment from another manufacturer that supports a given format.

“We have many hundreds of vendors and millions of users who use NDI, and it allows us to have real-world interoperability,” said Cross. “Any device that uses our API has no need for a gateway device, and there is no need to think about devices that can convert formats.”

An industry cooperating
The AIMS efforts are an example of the industry’s coming together: SMPTE is taking the work done by the VSF on the TR-03 and TR-04 recommendations and turning them into the SMPTE 2110 standard.

“When you go back about a year ago, the IP-standard proposals were fragmented, and it felt a bit like the tape-format wars. But then organizations like the VSF started to work with SMPTE,” said Cronk, who is chairman of AIMS. “And 10 months into the existence of AIMS, we can all agree that SMPTE 2110 is the way forward.”

The very nature (and beauty) of Internet Protocol and things like the World Wide Web is that there is not just one standard, because it supports a wide range of media formats, coding languages, etc. As a result, a large number of manufacturers support multiple formats.

“Our company supports ASPEN and AIMS, as the industry is not going to have just one format, and that’s a good thing,” said Cross. “It’s like web browsers that can work with both JPG and PNG images. IP will allow different ideas to come together.”

One key to future compatibility with existing products is the use of field-programmable gate arrays (FPGAs). The integrated circuits can be upgraded via software to make them compatible with ongoing developments.

“As things change,” he continued, “we will have much more flexibility to adapt production so that systems can work with each other, and we are all committed to adapting our technologies to what the market wants.”

It is also becoming increasingly clear that, even with completely open and agnostic IP standards that SDI will continue to play a role.

“We know that, with transitions from any format to another one, the old formats don’t instantly go away,” said Barella. “Formats will hang around, and you will need to have interoperability with them. So there will be a hybrid world of both SDI and IP existing together.”