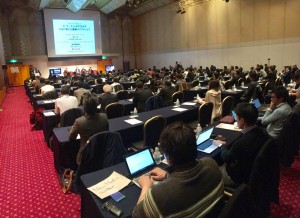 More than 130 Japanese sports- and TV-production professionals came out last week for Neulion’s TV Everywhere conference, in association with SVG, for a half day of discussion concerning the future of OTT in Japan and the role it will play in making sports more popular, fans more engaged, and productions more profitable.

“Our strategy is to focus on the smartphones as people in their 20s do everything on their smartphone and we are focused on the internet,” said Kazumasa Ashihara, executive board member, Japan Professional Basketball League (B.League).

Daisuke Nakanishi, executive managing director, Japan Professional Football League, discussed the J.League’s recently signed 10-year contract with Perform to provide free and pay-per-view content via streaming. The value of the contract points to a belief on the part of Perform that the value of the J.League will continue to grow as the fan base of other sports get older and often do not use digital devices.

“With people in their 20s holding their phones in their hands 98% of the time,” he said, “this is a target we would like to reach for viewers.”

Also helping in those efforts will be high-speed WiFi in 18 stadiums, which Nakanishi said will make it easier for fans to enjoy data and the different entertainment.

VR will also be part of that mix, and Nakanishi expects digital sponsorships to change and evolve, especially as IT companies look to showcase VR and other new technologies. Those showcases will, in turn, attract sponsors to join in. “We’re focusing on a lot of experiments, and it is a win-win for our sponsors,” he added. “Our advertisers are strengthened by using these technologies.”

The B.League has also embraced VR, deploying it last week for its All-Star Game. “We had a VR terminal in the arena and had cameras to give a different live experience,” said Ashihara.

Malachi Bierstein, head of sales, Digital Media Division, Nokia Technologies, pointed out that today’s VR is often 2D 360. The truly compelling experience adds 3D content to the mix. But the various flavors of VR also add caution to any production and programming decisions.

Nokia’s Ozo camera offers a live workflow that can allow one production to deliver both a 3D 360 feed and a 2D 360 feed so that viewers can get what they want. It is also designed to allow customers to leverage their already existing infrastructure, apps, and more.

Bierstein also discussed a five-camera shoot for the Conan O’Brien show at ComicCon2016. It was done simultaneously in both 2D and 3D, and the content was even properly mixed within the regular TV broadcast. Equipment required was five Ozo live servers, a 4K encoder, SSD recorders, a switcher, and color grading.

“It was really not that complicated at all,” he said, explaining that the signals came into the production truck, passed through the processing equipment, and then went out for broadcast.

Andrew Grant, head of OTT and Digital Home, Dolby Labs, cited an important launch at the end of next month by BT Sport in the UK, which promises to have reverberations around the globe: production of EPL matches with Dolby Atmos. Not only does it mean a more immersive audio experience but also things like dialogue enhancement, multi-language support, and additional commentary options.

“They will have custom Atmos delivery that will deliver a single workflow for Dolby Atmos live and in real time to soundbars and over-the-top to iPhones so that stereo headphones can deliver an immersive experience everywhere a fan goes,” he explained. “It’s a big deal for BT Sport and amazing for their customers, and we have been testing with BT Sport all season long to make sure what we are doing is perfect before it gets out the door at the end of February.”

Masanobu Nishii, producer, Television Osaka, reported that a Dentsu research study in Japan found that most of the video viewing on mobile phones is for video-sharing services, such as YouTube. “About half of video viewing is based on TV programming.”

That is one of the reasons that, increasingly, TV channels are looking to streaming to get content into new places or, in some cases, simply on-air.

“Besides NHK,” Nishii pointed out, “some content may not be available in all of Japan.”

Hironori Hashioto, senior managing executive officer, Japan Digital Serve, agreed, adding that OTT will prove attractive to regional Japanese TV channels that want to expand their distribution nationwide. He said that his company will offer new multi-device distribution that will provide many benefits, including a 4K solution for cable TV this April. JDS offers 54 TV program channels to cable distributors throughout Japan.

“There is a strong demand from viewers for second-screen content and content that is available anytime anywhere on any device,” he said. “Those are the missions we have.”

Nishii said a commitment to innovation and new ways of thinking is important.

“It’s all about the fan experience,” said Neulion co-founder Chris Wagner. “You can have home and away feeds, live integrated stats that happen more quickly than the video. There is also a need to give the fan a usable experience via simple user interface.

“The consumer,” he continued, “needs to be able to find all these great experiences, and the platform is an important part of taking advantage of rights and spending more time online.”