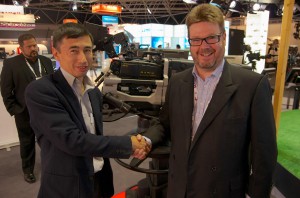 Sealing the deal: Hitachi’s Harvey with Gearhouse Broadcast’s Young and the SK-UHD4000 camera at IBC

Ultra HD cameras with 2/3-inch sensors, or at least the ability to use broadcast lenses with the deep depth of field needed for fast-moving sports coverage, were a hot topic at IBC. There were two new UHD cameras with 2/3-inch sensors, and all the main camera manufacturers were talking about how their 4K cameras could meet the needs of sports production.

Cameras that take B4-mount lenses allow users to zoom in just as much as they do with an HD camera, without the problem of dealing with shallow depth of field, which makes focusing tricky and risks missing some of the action. It is also far better for sports use at large venues, which need much longer lenses than most other productions, as a 100x zoom lens for a 2/3-inch camera is a lot smaller and lighter than a 100x lens for a large sensor camera would be.

There are three main ways of achieving the 2/3-inch look.

The most obvious is to develop a 2/3-inch Ultra HD sensor, but this can be very expensive, and there is a trade off for the smaller size in having smaller photo diodes, reducing the amount of light they can capture, which can also impact dynamic range. The increased resolution can also have a big impact on signal-to-noise ratio, although as sensor technology improves, that might just mean that new UHD sensors offer similar performance to existing HD sensors that we’re happy with.

The second, and probably simplest, way is to take three (or four) HD sensors and apply pixel shifting to increase the resolution. This requires each sensor to be re-aligned very slightly horizontally and vertically from each other, but this does need to be extremely accurate to work. However, while it can produce a UHD image, it can also result in a poorer HD image when you down-convert for HD transmission.

The third option is to take an existing, larger 4K sensor, and use an expansion lens that takes the target area of the B4 (2/3-inch) lens and expands that out to the full area of the sensor. When you down convert this, you get crisp HD images, but as it will almost certainly be a single sensor, the de-Bayering process needed to interpolate a true colour representation from the mosaic of different coloured sensors does generate artefacts. Of course, one Super 35mm sensor is more than six times as large as one 2/3-inch sensor, but as the Bayer pattern mask can reduce the amount of light hitting each pixel by up to two thirds, the sensitivity advantage could lie with the three-chip camera (all other things being equal).

At NAB, Grass Valley showed a box camera prototype three-chip 4K camera, seeking inspiration from users, who firmly told it they wanted more flexibility. Therefore, it will release a native B4-mount 4K system camera for studio, OB or shoulder-mounted use, with three 2/3-inch sensors, by the end of the year.

Unlike cameras that need a PL-to-B4 converter, it doesn’t lose any sensitivity, “and it has the depth of field you need to track a player across a field and keep them in focus,” said Mike Cronk, senior vice president of strategic marketing, Grass Valley. He also promised “better colour resolution than a lot of the 4K cameras out there.” 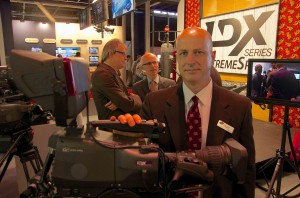 In the system: Grass Valley’s Mike Cronk with the new 4K LDK camera at IBC

The cameras will also integrate seamlessly with current camera control systems, via fibre. “In a mobile environment it looks and feels like every other camera,” he said. “This is the breakthrough that will allow broadcasters get more standard with Ultra HD equipment.”

The 4K system camera includes: CLASS4K (Chromatic Lens Aberration and Sharpness Solution) to improve the sharpness of broadcast lenses; XF transmission for full bandwidth transport; and supports the full range of accessories, including the SuperXpander for large lens productions.

“Our B4 lens solution enables 4K without changing the story telling. Others use PL lenses, or B4 convertors which reduce sensitivity. The PL lenses have shallow depth of field, which is less suited for sports and entertainment,” said Cronk.

The new Hitachi SK-UHD4000 Ultra HD camera uses four 2/3-inch MOS sensors, and received a big boost on its launch from Gearhouse Broadcast, which snapped up the complete first production run, with plans to offer them for use on the upcoming Asian Football Championships in Australia in January.

It takes traditional B4-mount broadcast lenses, which Paddy Roache, director and general manager, Hitachi UK, sees as “the most logical way forward, to allow production companies to make reasonable financial evaluations about moving into 4K. From a technical standpoint, it drops in [to existing infrastructure] beautifully. It’s a TV system camera, not a cinema camera.”

Pre-production models are currently undergoing tests with various broadcasters. In one, the camera was used in a Sony-based OB truck, “and it slotted straight in. All of the tallies, intercom systems, returns, all plugged in and operated the same way, and because it is 2/3-inch, all the cameramen were able to operate it exactly like an HD camera,” said Richard Harvey, Hitachi technical director at IBC. It functions as a normal 1920×1080 50/60p 3G camera while recording 4K in real time, and its power consumption is similar to an HD camera (at less than 38W).

“It is particularly suitable for sport. It’s a totally workable solution,” added Roache. It was developed after a lot of feedback from sports production companies.

The camera uses four new CMOS sensors (one red, one blue and two green for extra sensitivity — F8, with S/N of 59dB), with a SMPTE-304/311 hybrid fibre connection to the compact CU-UHD4000 2U camera control unit, which has simultaneous UHD and HD outputs.

It will probably cost about 30-35% more than a fully specified 3G-SDI camera. “Even for people looking for an HD camera, this camera is a good economic proposition,” claimed Roache, “as tests in HD showed it comfortably outperformed conventional HD cameras.”

Gearhouse is buying 50 cameras to equip two new UHD OB trucks, in the US and Australia, with the remaining 20, or so, cameras being held in the UK for use by OB companies looking to upgrade their HD trucks who want to migrate to UHD, but not yet. “We think this camera is a great way of managing the transition to 4K,” said Adrian Young, commercial director, Gravity Media, parent company of Gearhouse Broadcast.

He hopes to get the first delivery of the camera by the end of December, to offer them to Asian broadcasters for the football. “The beauty of their 4K camera is that it operates, to all intents and purposes, like their HD cameras, so it needs no adaption,” added Young. “As it can be used as an HD or 4K camera, it gives us great flexibility.” It can also be used with Gearhouse’s existing stock of Canon lenses.

It uses Hitachi’s Real-time Lens Aberration Correction system to eliminate most lenses’ lateral chromatic aberrations. Hitachi claims that using an adaptor on a larger sensor camera renders those camera’s aberration correction systems useless, making this another reason to go for native B4-mount cameras. It uses a new OLED viewfinder, which is also compatible with Hitachi’s other cameras.

The CCU’s UHD output of four 1920×1080 signals allows monitoring of any one of four quadrants on existing HD-SDI test and measurement equipment. Each quadrant contains a full 2K raster. It also offers Pan and Scan output, allowing an HD cut-out signal to be positioned within, and selected from, the UHD raster. It can be output independently from the super-sampled normal HD-SDI outputs.

Sony’s F5/F55 cameras have been the most widely used cameras for sport, and it offers two adaptors to take B4-mount lenses. The LA-FZB1 optically enlarges the 2/3-inch image 2.6 times to cover the Super 35 sensor, without changing the angle of view. It does incur a 2.6 stop loss of light, but the sensor should still be sensitive enough for most applications. The adaptor supports lens zoom, iris control, and lens-mounted recording stop/start control. The LA-FZB2 adaptor adds motor-driven neutral density and colour correction filters, for remote operation in studio/OB configuration for larger lenses. 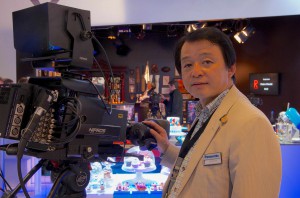 Panasonic showed an engineering demonstration of a 4K “2/3-inch” camera at IBC — which uses a single sensor and has a built-in “low loss” expansion lens that fits in the same space as the prisms would on a three-chip lens. “It has reasonably good resolution, and you can keep the same depth of field as a 2/3-inch camera,” said Panasonic product manager, Noriaki Ugo.

Panasonic built the demonstration to find out what users want, whether a box style or system camera, or even to produce it as a third interchangeable head for its modular new Varicam camera (alongside 2/3-inch high-speed HD and Super 35mm 4K/UHD heads). “Eventually we want to have all of that — but which first?” he added.

The company hopes to have a prototype at IBC next year, but “because of the reaction from the user, we may need to accelerate the development.” Most of the interest was for sport.

The Blackmagic Studio Camera 4K at only $2,995, uses a micro four-thirds camera sensor that can take an add-on B4 (or other) lens mount (although optical adaptors that retain the same angle of view will lose a stop or two), and with its large (10-inch 1920×1200) viewfinder and tiny size, it could be useful for OB use. However, it only goes up to 30fps in UHD (50/60p in HD) and doesn’t have a global shutter, so there are some rolling shutter effects evident if you pan it quickly – so possibly best for presenter shots only.

The same problem may also apply to the upcoming Broadcast (B4-mount) version of the Blackmagic Ursa, due later this year. It will use a different 13.056mm x 7.344mm UHD sensor than the other (Super 35mm) Ursa models, but it’s not known yet if it will have a global or rolling shutter – although the other Ursa models have a global shutter. The sensor is about 60% larger than a 2/3-inch sensor.

While others were experimenting with UHD at the world cup in Brazil, NHK was continuing its Super Hi-Vision development by shooting nine matches in 8K, with public viewings in 8K and 4K at three sites in Brazil and four in Japan, with the intention to broadcast in 8K by 2020 for the Olympics in Tokyo.

It used three Ikegami SHV-8000 UHD 8K cameras to cover the matches — alongside two For-A FT-One high-speed cameras that were upconverted from 4K to 8K, as well as a Sony F65 for ENG.

Ikegami’s third-generation 8K camera uses four 1.25-inch sensors and it hopes to use this technology for future 4K (and beyond) cameras. In the meantime it, like Arri, is arguing that higher dynamic range, with 20 times the contrast of standard video, better colour rendition and image sharpness, is a more important consideration. It uses Arri’s Super 35mm sensor in its HDK-97Arri camera, and will be offering a 4K output board for it, up-sampling to Ultra HD in the CCU. Arri also believes live upsampling (soon to be offered on its documentary-style Amira camera) from its 3.2K sensor is an easy way to transition to 4K.

Ikegami also showed a 32-inch Ultra HD monitor at IBC, with an LED-backlit LCD screen. The prototype has two HDMI 2.0 inputs, but could come with a variety of other inputs, depending on what the UHD market chooses to standardise.