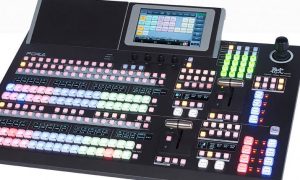 With some of the biggest names in sports scheduled to appear and workshops covering the most pressing technology topics, the 14th annual SVG Summit is an integral event for those involved in sports production for broadcast, venue operations, college or team operations, asset management, as well as digital and over the top (OTT) production.

FOR-A is set to be among the vendors at the Summit, which runs from 16-17 December in the NY Hilton Midtown in Manhattan. The company will showcase its comprehensive product integration with its range of video production switchers, video servers, graphics, playout, and all-in-one production systems at the company’s booth.

The compact Hanabi HVS-490 opens the door to more affordable 4K production. HDMI 2.0b specification support provides 4K output to a multi-viewer. Offering exclusive features, including MELite technology, which extends the switcher’s 2 M/Es to offer 6 M/E performance, the HVS-490 is designed for use in any live environment, including mobile shoots, events, and in-house corporate productions. The switcher provides users with event memory and macro functions, as well as integrated frame synchronizers and multi-viewers. It will be shown with its control panel, the HVS-492OU operation unit.

Both Envivo systems will be shown with a Dante audio interface, enabling the systems to support uncompressed, multi-channel, low latency digital audio over a standard Ethernet network. Studio and Replay also support Network Device Interface, a free protocol for Video-Over-IP.

A demo of the latest ClassX solution of 2D/3D character generation and live motion graphics and playout software integrated with FOR-A video switchers will also be part of the booth. ClassX’s graphics suite of solutions is popular with universities, digital signage, live event, and sports production applications. FOR-A is the exclusive distributor of ClassX in North, Central and South America. The agreement provides broadcasters and live event producers with the ability to create and play out ClassX real-time broadcast graphics integrated with FOR-A video switchers.

Odyssey’s Insight Production Server, a multi-channel playout system, will be on display as well. Available in a two or four-channel configuration, the Insight server offers Web interface for control from any device with a web browser (no installation required). It provides a wide range of supported wrappers and codecs for media contribution and video play out with time delay playback.