At high-profile events like major golf championships and Grand Slam tennis tournaments — not to mention the Olympics — broadcasters are live-streaming more feeds and alternative angles than ever in an effort to better serve viewers beyond the linear broadcast. How does this phenomenon complicate traditional transport schemes onsite, and how is it driving the transmission industry’s growth? Vendors and broadcasters discussed the impact of the OTT and streaming explosion on remote production during a panel discussion at SVG TranSPORT last week in New York City.

Tom Sahara, VP, operations and technology, Turner Sports, discussed Turner’s partnership with the NBA on League Pass, a product that is hosted and distributed by Turner Sports. 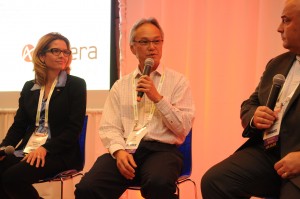 “It is a mobile and an OTT service and also through cable distributors so that any screen can get to the NBA League Pass,” he explained. “We are also looking at other products and wrapping them around League Pass, like Mobile First, a product that has a game camera zoom in and follow the action. On the phone, it can be hard to see what is going on, as the players become little dots. So, to help out mobile viewers, we zoom in a little tighter to make it easier for viewers to watch.”

The new mobile service requires both a producer and a camera operator, the former to make sure that the time-outs are covered and commercials in the linear-broadcast feed don’t run. Sponsors for the new feed are inserted during time-outs.

The game experience is also being extended beyond just the game feed. Multiple camera angles are available, which is attractive to a subset of fans who want more than just the TV coverage. Turner Sports has done it successfully on the PGA Championship, where fans could watch dedicated hole coverage and marquee groups for all 18 holes.

“It’s very popular and offers another view of the event that you can’t see on TV,” said Sahara. “We’re always interested in finding out what is going to be the next piece of content the viewers want to see.”

Technology to improve quality over the internet

Helping in those efforts are new technologies that improve the quality and timeliness of content delivered over the internet. Aspera CEO Michelle Munson said this is an exciting time at Aspera, comparing it with the emergence of file-based workflows 10 years ago. Broadband is more available, she pointed out, allowing consumption of content via second-screen devices, and fans want to be able to experience everything.

“Our transport software [makes streaming] reliable over the unreliable internet,” she explained. “EVS has done a lot of interesting things with end-to-end solutions, and they called us to innovate and make live delivery of content possible.”

An example of the technology in action was delivery of 10 streams of Chinese Basketball Association competition to Europe with predictable quality.

“The bane of the internet for reliable streaming is the usual traditional tradeoffs,” Munson said. “You can add redundancy to create protection, but that wastes bandwidth, or you can do that do that downstream and have to wait for buffering. But we can get rid of latency from live so you can stream high quality with no glitches. You need to get rid of the old ways of thinking, like using forward error correction, and replace it with a model that is more statistically ideal so you can retransmit lost data timely and maintain quality.”

John Ward, SVP, content operation, AT&T Entertainment Group, explained how DirecTV has had a presence with multiscreen coverage of events for some time. It has worked with networks like ESPN, CBS, NBC, and Fox to create a mosaic TV channel that allows viewers to watch multiple channels on one screen or dive into any of the channels individually and bring, for example, a tennis match on an outer court at the US Open to full screen.

“NFL Sunday Ticket is our biggest PPV entity and a big component of that is the OTT piece like Fantasy Zone and Red Zone,” he said.

The challenge is bringing the signals in to the AT&T Los Angeles Broadcast Center, turning them around, and monitoring the streams, inserting the right conditional-access terms and also being able to effectively troubleshoot the streams.

And then there are security issues, as hackers try to get into the site. “It’s a huge concern,” he stated, “especially with proprietary content or even when streaming local games that are blacked out.”