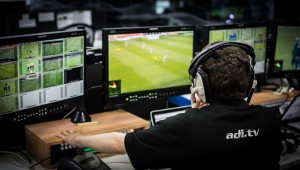 After six years at BBC One, the UK’s Football League Show moved this season to Channel 5. The new show was built on one significant, slightly radical, change – it would move from its late night pre-midnight slot to smack in the middle of primetime at 9pm. The shift was enabled by an entirely file-based workflow, underpinned by a robust IP infrastructure. The old incarnation of the Football League coverage relied on linear delivery of match highlights, which substantially limited the speed at which a show could be put together.

In 2011, ADI approached the Football League with a forward-looking white paper about the future of sports venues, connectivity and broadcast outlets. “Channel 5 is a really great example,” notes Geraint Williams, CEO of ADI. “They aren’t currently known for having that kind of sports content. We’ve seen that with other federations too, where they’re looking at other kinds of online providers.”

ADI sees itself as a completely neutral provider of services, providing optimal services and infrastructure for both the League and broadcasters. “ADI is the second largest provider of connectivity in the UK,” says Williams. “There’s BT and SIS and ourselves. We are a truly agnostic partner. We’re not linked to any rights holder or anyone buying rights, or a betting organisation or someone who’s trying to sell data. We are there purely as a technical service provider to add connectivity to a federation like the Football League.”

“We have a team of people at Preston who are managing the interface with the cameramen at each match. They’re a mixture of engineers and really good technical team, providing hands-on help or the cameramen, who know their way around the cameras. It’s all very well having wall boxes on a gantry for people to plug into, but sometimes there is too much of a psycghological bridge to span there without technical assistance.”

ADI has partnered with Adobe, using its Adobe Anywhere solution. Adobe is being used to clip up the 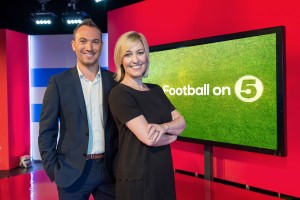 matches and ‘harvest the goals’ and extract key moments. “I can’t say enough about how good Adobe have been in this process,” says Williams, “with their ability to understand a project we brought to them a number of years ago with a very different application for their Adobe Anywhere cluster. Anywhere is typically designed around enterprise solutions with 200 editors in one organisation — whereas we have 200 users, but they might be split among 100 organisations.”

The ADI solution is entirely data driven, with data captured by cameras at the matches written directly to a storage area network. “Unlike some systems where they would turn the IP back to video and then ingest it onto a platform, from the moment the light hits the camera lens and gets encoded in our wall boxes, it never ends up decoded or encoded again until the final output to the show.”

The workflows: ITN Productions and Sunset+Vine

ITN Productions won the contract to produce footage on behalf of the Football League, including Championship, League One and League Two matches, and then pass it on to rights holders, which include Channel 5 and Sky. ITN’s infrastructure improvements have allowed fast transfer and processing of data, and it’s this link in the chain that has made Channel 5’s primetime Football League Tonight possible.

ITN’s CTO Bevan Gibson explains the workflow when the match footage arrives directly from ADI. “We bring all the content into our data centre. We record it all live. So on a busy Saturday afternoon if it’s a full fixture list, we have up to 36 simultaneous games. As the games are going on, our team at Gray’s Inn Road begin to make our highlights package.” 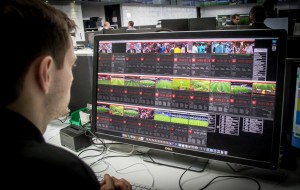 ADI has partnered with Adobe, using its Adobe Anywhere solution to clip up the matches, ‘harvest the goals’ and extract key moments

Highlights are sent out match by match as each is edited. The footage normally contains ten minutes of highlights, up to the final whistle, but in some instances there may be a post-game press conference or significant event requested by one of the Football League’s partners sent as additional material. The footage is accompanied by simple metadata, which includes the teams involved and sometimes the score.

“A third of those games we deliver an hour after the event, the next third two hours after, and the final third three hours,” says Gibson, “Those are all delivered as AVC-I 100Mbps files to the free-to-air and pay TV production partners who then ingest them into their own workflows.”

Channel 5 and Sky are located in the same data centre as ITN, so delivering material is literally a matter of moving files. Delivery to other partners, including YouTube, also involves a simple file transfer, and ITN also uses Aspera for some other deliveries.

Gibson remarks on the step change between linear delivery and file-based delivery. “Now we can just say to our partners ‘The file’s there’. They don’t have to hit record and then wait for it anymore. From our perspective and from the Football League’s perspective it’s been a successful transition.” ITN is in discussions with the Football League to introduce a web interface for delivering footage to new Football League partners around the world.

Sunset+Vine produces Football League Live for Channel 5, taking over from IMG’s production of the BBC show. The show’s executive producer Stephen Booth believes Sunset+Vine’s willingness to try new approaches was attractive to Channel 5. “Sunset+Vine’s got a reputation for creativity and originality in its programming,” says Booth. “And I think we understood that it was a nine o’clock Saturday night programme. That’s a different proposition from a programme going on in a more traditional late night football slot. We recognised that this wasn’t just going to be a standard highlights show, but would contain elements of entertainment as well.”

Sunset+Vine has tried to invigorate the show by introducing a studio audience, dual presenters, and guests who have played in matches during the day. The show also features appearances by former professionals providing commentary on several difference matches. Sunset+Vine have also done away with the more detailed match analysis commonly seen in more traditional football programmes.

“We’re standing up throughout, there’s a lot of movement round the studio,” notes Booth. “It’s a different style of studio than has previously been used for highlights.”

In the opening weeks of the show Sunset+Vine kept to its original vision. “There have been a few graphics tweaks, but we’ve largely stuck to the first ideas we had. But in all the football programmes I’ve been involved in you change things as you go along. At the end of season one we’ll have a chance to sit down and think about things in greater detail. I don’t imagine it looking the same in year three as it looks at the end of year one.”

Graphic design for the show is done by Jump Design, who also designed the title sequence. Ealing-based Mammoth Graphics are the graphics provider for the show with graphics technology provided by Vizrt.

“We wanted to use graphics to give people a better idea of the context,” says Booth. “We have a different colour scheme for each division. Championship is red and white, League One is blue and white, and League Two is yellow and black. That pervades through the entire graphics and studio look, so there’s a visual progression of divisions throughout the programme.”

Booth reiterates that the impressive feat of getting the show on at 9pm is still the prime focus. “The most daunting part is getting reports out on 30 odd games at 9 o’clock in the evening, which has never been done before. And the ADI system is absolutely key to that. We can see a lot of these games as they’re going on, whereas in the past we had tapes taken to the local BBC playout area that were collated as the evening went on. So far – touching wood – it seems to be working.”