SVGE Football Production Summit: Telling the story of football from the channel perspective 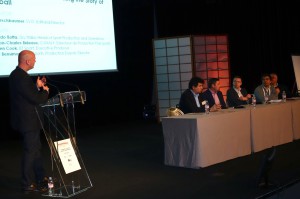 2014 will certainly keep broadcasters busy with not only their own national leagues but also Champions League and for some, the FIFA World Cup. From a channel perspective what are some of the new and developing approaches to telling the story of not only the match itself but also the studio show? In leading off this session, moderator Ken Kerschbaumer, Sports Video Group Editorial Director, touched on the issue of lighting. Poor stadium lighting is a major issue in the US, he said, wondering if the same applied across European football leagues and what can be done to help stadiums in this regard?

“Unfortunately in France the stadiums are managed by people who don’t invest in light,” said Francois-Charles Bideaux, CANAL+ Directeur de Production Sports. “I am sorry to say that most stadiums in France have poor light. Very poor – even in Park des Princes.”

Riccardo Botta, Sky Italia head of Sport Production and Operations, concurred. “Just yesterday we had a meeting with the Italian Serie A league and InFront about lighting, because we had complained that not all the stadiums have a decent amount of light. For us it’s a very big issue.

“We will try to fix the problem, but yes we have the same problem in Italy because stadiums are owned by the cities so it’s very difficult to ascertain who has to pay the cheque when you want to fix the lighting problems. For us it’s one of the key topics with Serie A, now that they are opening the bids for the next cycle of rights.”

Nick Moody from [English] Premier League Productions said, “we a meeting with the clubs a couple of weeks ago to discuss this issue. It is a problem, especially for some of the promoted teams into the Premier League. The big issue is that LED is coming, and Philips is still developing — and also clubs don’t wish to take out existing lighting to put in new lights that may not be what’s required in four to six years time. So at the moment in the UK we’re probably at a bit of a crossroads, waiting for the LED technology. Clubs are unsure of which way to go. We’re waiting for Philips to come up with all the answers!”

That brought a laugh as Cook moved on to tell the audience that BT Sport is “the new kid on the block” and broadened the discussion to encapsulate some of the ambitions of the young sports broadcaster. “I always refer to something I learned when working for ESPN in that the ‘E’ in their name stands for Entertainment. That’s the business we’re in, I think. We can talk about graphics and data and all of those things and they’re very important. But based in Olympic Park as we are, I don’t remember Jessica Ennis’ time when she ran the hurdles in 2012 but I do remember her face when she won the gold medal.

“So we look to tell stories through emotions,” explained Cook, “and it’s important to us to look around the world and learn from other broadcasters. We try to give our viewers the experience of a day at a sporting event. We present from outside stadiums, from pitch-side, from inside the dressing rooms. We’re pushing the envelope a bit with BT Sport; we are new but we’re trying different ways of presenting sport and telling stories is very important.”

On the subject of storytelling in sports production Bruno Bensimon, BeIN Sports Deputy Director Production said, “it’s very important to be seen on site and we like to show to our audience that we are deploying a lot of materials and technology to be on site. The other thing is regarding statistics, or replay or virtual graphics – today we are trying to keep our studio focused on the game.

“The most difficult thing is that we don’t want to be inundated by statistics during the game. We need a good editorial approach to condense, for our viewers, what the statistics mean. Today and in the near future with Red Bee systems, it would be good to make the link between the storytelling of the coach saying to a player he must play in a certain way with a timeline retracting his movements subsequent to the coach’s directions. This is the kind of information we must be able to provide to our audience, rather than a big list of statistics or percentages on screen.”

The number of cameras, specialty cams, graphics, stats and virtual sets are all on the increase, noted Kerschbaumer. But how do football broadcast producers get closer to the players and coaches? Is the access to the game increasing as well?

“It’s about relationships basically, building trust,” said Cook. “You don’t get coaches wired for sound if you don’t build trust with them. With the Premier League it’s difficult. But we keep knocking on doors – for example it’s a lot easier to get into Hull City’s dressing room with Steve Bruce, than it is at Liverpool with Brendan Rogers. You have to pick your battles. The Premier League is growing and they’re starting to understand the broadcasters’ needs.”

Nick Moody told the audience that the Premier League has this year set up a broadcast approval panel so “every club has to provide a player ahead of match day for interview. All 20 clubs will be providing a player every week, and we feed that around the world. The Premier League has taken the responsibility and made the clubs provide extra material we can then send to all the licensees. I think it is the responsibility of the league to do that, because they’re getting a lot of money from the rights and we have a duty to provide as much as we can to the broadcasters. It’s working.”

For Riccardo Botta, gaining closer access to players and coaches “is a matter of education. I think in Italy the clubs and the press officers are behind [the curve], they have not yet understood properly the value you can get in giving proper access. We have done road shows with some of the key teams, explaining how we wanted to produce.

“It can be a win-win story,” said Botta. “In Italy, [access to] the locker room is a right that the league sells. Last year some of the clubs didn’t want us to go in for the warm-up; they [the league] had sold us the right but the clubs were not even aware of it! So that’s why it’s a matter of education – we always demonstrate that we make proper use of the footage we take in the locker room.”

Wrapping up the session, Kerschbaumer asked the panellists if they were to be granted one wish in relation to telling the story of football production on match days, what would it be? “What I’d like to see is referees miked up, like they are in rugby,” said BT Sport’s Cook without hesitation. “Rugby Union has benefitted so much from the viewers being able to hear the reasoning behind the referee’s decisions, and I think that football would benefit from the same thing.”

“I agree and I will go further,” said Bideaux. “The football environment is quite conservative. We see in motor sport and rugby that there are on-board cameras and referee microphones, and now in France and the UK the ref cam as well. So we have sound and picture from inside the game and it is very impressive. All these kinds of tools are blocked for football.”

Referee mics were also top of the football wish list for Riccardo Botta. “Today what we need and what the viewer wants is to hear the referee. I know it’s a dream! But I think it would be very beneficial to do it, because the players would be more gentle with the referee if they knew they were being recorded and heard by the audience.”

Finally, Botta again touched on the issue of restricted access and cooperation with football leagues, compared to coverage of other sports. “In football, they are reluctant to see any kind of change. Compare for example the level of cooperation we have with Dorna for MotoGP — whereas with Serie A it’s like a different planet!”