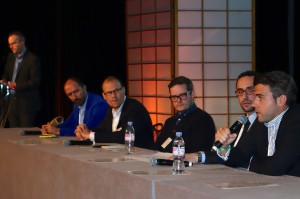 Experts in the second screen experience took to the stage at the third-annual Football Production Summit in Paris to discuss the future of a market segment that continues to capture more and more attention of marketers and fans alike but still, in many ways, is in its infancy. Front and centre was FIFA TV as this summer the World Cup will redefine the second-screen experience.

During the 2010 World Cup in South Africa rights holders had the opportunity to offer viewers highlights specifically built for smartphones. But this summer fans will have not only smartphones that are five or six generations more advanced but also the now ubiquitous tablet.

“This is the first time that the fans will have all the content that’s available on a second screen not only before and after the match but also during with multiple feeds and multiple camera angles,” explained Stefan-Eric Wildeman, FIFA TV, manager of sales and distribution. “And we think that broadcasters need to provide that second screen service as they have the rights and content and are in the best position.”

FIFA is working closely with Deltatre and Netco Sports on the white label app that is designed to give rights holders the flexibility to integrate their brands, logos, and colours into the app. Carlo de Marchis, Deltatre, Chief Product Officer and Group Director explained how the company is looking to use the World Cup to expand on the success the Diva player had at the Sochi Olympics. And metrics from the Winter Games point to the growing use of apps as a primary means of consuming sports content. In Canada more than 2.5 million of a possible 12 million smartphones downloaded the app and when the USA played Canada the CBC app had one million viewers. “They don’t care if it is a first or second screen but they do care about the user experience,” he explained. “They just want good content and a good experience.”

Christopher Rapaport, a consultant with app designer Netco Sports is working on the FIFA app and says that the second screen video experience is no longer just a video player and a programming guide. “You need enriched content,” he said. “How do you manipulate the content and create the best user experience? We will have six live camera feeds per match, giving users the opportunity to manage their own content as EVS C-Cast gives a lot of flexibility in choosing highlights and cameras.”

Along with enriched content is enriched advertising. Wildeman said that rights holders will be able to add their own advertising and own content, an important step to meeting both those needs. “It is by no means a fixed solution,” he added. “There is a frame with centrally produced content at the core, like the live match and multi-angle coverage. And then above that is the VOD section.”

FIFA is also partnering with the major social media platforms like Facebook, Twitter, and Google+. “It’s really difficult to compete with a global platform like Twitter so we are going to give fans a single point of access that puts the bits and pieces [of social media] together. We put a great amount of effort into that.”

And even though the matches are still several months away it has reached the first level of success: bookings. “We have placed the rights in all territories and the next success factor will be the numbers and traffic and video consumption during the event to give us insight,” said Wildeman.

All about the now

Tom McDonnell, CEO of Monterosa, said that in many respects the current landscape is still the Wild West as broadcasters figure out how to make the best use of not only social media platforms but also the data that is associated with it. One piece of advice? Remember that social media is all about the now. Monterosa’s LViS Studio producer console, for example, lets users create and manage realtime gaming, competitions, voting and data capture within HTML5, iOS or Android apps for a TV show, event or outdoor audience.

“When the commentator says ‘now it’s your turn to rate that goal’ and they suggest viewers go to a Web site you can see massive levels of uptake within a minute,” he advised. “But if you tell them the day before to turn up during the game you will be no uptake.”

Thankfully, it appears that the clients see the value of realtime engagement and are building that value into their core operations. They are also, increasingly, looking to outside entities to help them drive maximize engagement. “There is a cultural change,” he explained as companies like his are now allowed to play a larger role in mapping out strategy with their clients.

David Collet, Head of Opta France, added that the football industry is entering an era where the connected community will make it easier than ever for football fans to create a truly customised experience.

“They will be able to get extra content and engage with and share content through the second screen and then amplify it through Twitter and social media,” he explained. And much of that content will increasingly come not from traditional rights holders but rather the clubs, the leagues, the stadiums, and even the players themselves.