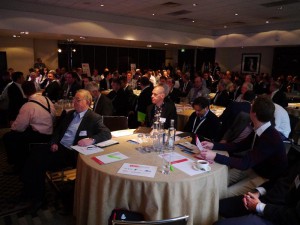 More than 170 people attended the final SVG Europe technology summit of 2014 – FutureSport, which took place at Lord’s Cricket Ground, London, and featured a host of leading names reflecting on keynote events from this year and looking ahead to the emerging technologies and techniques set to define 2015.

After a scene-setting introduction from SVG Europe executive editor Fergal Ringrose, a Sky team comprising Robin Broomfield, Chris Johns and Keith Lane discussed the lessons learned during the broadcaster’s live 4K trial conducted at the recent Ryder Cup. Exclusive content was shown during the session, a full report on which can be read here: https://www.svgeurope.org/blog/headlines/svge-futuresport-2014-sky-sports-outlines-advances-delivered-by-ryder-cup-4k-trial/.

Audio remained in the spotlight after a networking break with Rob France, senior product marketing manager at Dolby, discussing the company’s current work on object-based audio. The result, says France, will be a further heightening of broadcaster’s ability to deliver personalised audio experiences to fans at home; full report here: https://www.svgeurope.org/blog/headlines/svge-futuresport-2014-dolby-and-the-rise-of-object-based-audio/.

The day was closed out with three far-reaching panel sessions. Personnel from Broadcast-Solutions GmbH, EVS, I-MOVIX and Broadcast Rental discussed the latest innovations in ultra-slow motion replay technology. A full report on the session will be posted on SVG Europe tomorrow.

Detailed reports of these – and all other – sessions will appear on SVG Europe over the next few days.