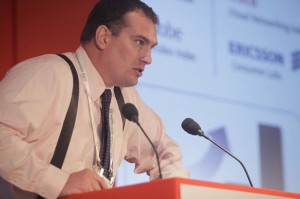 Josh Stinehour, Devoncroft Partners: “Vendors are all fighting over the area that sits between specialised applications and the general-purpose layer”

US-based broadcast industry analyst Josh Stinehour of Devoncroft Partners examined some of the key trends and developments expected to affect sports broadcast professionals in 2015 and beyond. “Organisations like SVG are a phenomenal resource,” he said at the top of his presentation. “There’s really no better information data point for a vendor than talking with an end-user or vice versa.

“My observation would be that most people in this room are very good at their jobs,” he continued. “You’ve just been lacking information on which to base your decisions.

“We do an annual study at Devoncroft of end-users, where we ask about 10,000 in a given year, 100 countries and 10 languages – so quite the effort. We talk to all the people that buy, specify or user broadcast technology or broadcast technology service providers. It allows us to really take the temperature of things that are quite pertinent: budgets, trends in budgets, where people are with their infrastructure developments, what they’re seeing over the horizon,” said Stinehour.

“We also ask them what they think about specific vendors. This is a good gauge for vendors to estimate the efficacy of their marketing and messaging. We partner with industry trade group the IABM, to count all the seashells on the shores of the industry. We’re saying it’s about a $39 billion dollar market with 3,000 vendors.”

“Viewing habits are changing,” said Stinehour. “With sports rights, there seems to be no ceiling as to how high they can go. There are lots of technology transitions taking place.

“Sports are very lucrative. But my small American brain can’t really process the European sports leagues, and especially the soccer leagues. In North America, if you look at sports rights over 10, 15, 20 years, these are pretty much locked in for the foreseeable future. So my point is, even if the world changes, it’s not going to change too quickly for the sports world.

“Specifically with people buying sports broadcast technology or services, when we asked them how their budget for 2014 compared to 2013, 46% said it had increased. 37% said it stayed the same,” he said.

“Looking forward to next year, even more overwhelmingly positive – 54% increase, 37% stay the same. What does that say? It says sports rights keep going up – and sports budgets keep going up.

“As far as advertising goes, an SD commercial is the same rate as an HD commercial, is the same rate as a 4K commercial. But the costs are dramatically higher. So who is going to pay for 4K, outside of government mandates? Is it going to be consumers, broadcasters, pay TV operators, or new distribution outlets? I would really love to hear an answer to that one,” observed Stinehour.

“Multiplatform content delivery is far and away the top trend that organisations feel is going to affect their business over the next two to three years. But if you then ask, where am I actually spending money, you have this true disconnect. Multiplatform content delivery may be the No 1 trend – but it’s not the No 1 place where you are spending money. Not in the top five; in fact it’s number seven. (And in the sports vertical it’s even further down).”

“Why might that be? When we think about how sports are monetised, at the Superbowl, less than half a per cent are watching online. And while FIFA may suggest the recent World Cup was the largest multimedia sporting event in history, or the Sochi Olympics where some of the hockey games had the largest streaming audiences of all time in the US… but are they actually paying the bills?” he asked.

“As cute as those announcements are, there’s very limited profit or even revenue coming from those initiatives. The entire infrastructure that brings this video to life is on the backs of the traditional linear business models; TV subscriptions and TV ads. They exist at the pleasure of this infrastructure.

“You can stipulate as to how much people have changed the way they consume content. How people make money from that content has not changed. But it will: people aren’t going to get up in the morning to make great content if they don’t get paid for it. So we’re going to have to figure out something to get from here to there.

“I’m being kind in saying there are evolving revenue models. But there are real fixed costs for the technology and there are real fixed costs for the content – and there’s a meaningful variable cost now introduced to the distribution of that content. What I mean by that is, every time someone somewhere watches something on a tablet, someone somewhere is losing money. Because there is an incremental cost involved, for each additional viewer to get to that content. There is not a revenue model yet that is even covering that cost,” he said.

“The revenue challenge is severe. But what’s more interesting is to look at the cost challenge. The analogy I use is that if there were bars of gold stacked neatly on the moon, it would still not be economical to go and retrieve them, because the cost of retrieving the bars of gold is far in excess of what you could sell them for.

“This is a problem that needs to be solved. But let me say that there is no problem in this world that won’t be solved if you allow someone to get rich solving it. It will get solved — by definition.

“Who’s making money online? The rights holders love it. The rights owners love it, as do content libraries. And trade shows love it – because it’s another thing to talk about. But it’s a problem that will get solved…”

“After price and spec, when we ask people what is the next thing that affects your purchase decision, the number one thing far and away is ‘makes us more efficient or saves us money’. When we look at what is going on in technology, the only thing that should be specialised is what needs to be special; for everything else, let the IT guys or the generalist service providers do it. And that’s what we’re really continuing to see changes in technology.

“The biggest driver is the move to IP. I steal a quote from a friend in a European telco who said, “IP is a freight train that’s coming to the industry; you either get on it or you get run over”. This is the most interesting trend that is facing the industry, from a technology standpoint,” said Stinehour.

“How far away are we from the IP trend taking hold? If we take the analogy of HD, the early adopters were in the late 90s, and in 2014 we’ve just gotten past 50% penetration [of HD broadcast services worldwide].

“Where are we on the IP adoption curve? We’re not even at early adopters. But it’s going to happen, purely from the economic standpoint that everyone in this industry will benefit from the IT industry. If you look at the R&D budgets of ten IT companies that deign to come to IBC, it’s far in excess of the annual product sales of the entire industry. No-one’s going to out-R&D them.

“But it is a positive. When we ask end users do they think IT R&D is going to benefit their business, they do say yes. It’s a collaborative effort – there are a lot of bodies in the industry right now trying to solve the inherent interoperability issues involved. Vendors are all fighting over the area that sits between specialised applications and the general-purpose layer.

“The transitions in this industry have traditionally driven the product spend – analogue to digital, black & white to colour, SD to HD. But this trend is different: we’re going from on-premises specialised hardware into a more IT-based infrastructure enabled by file-based workflows and IP transitions. This is not about moving boxes, this is about shifting business models, operations, culture and technology.

“When we ask end-users who is the best vendor to help you with these trends to IP and the cloud and service-based platforms, far and away the number one answer is ‘Don’t Know’. There’s a lot of uncertainty out there – but that means there’s a real opportunity here for vendors to solve critical problems for their customers. Never let any crisis go to waste, as we say in the United States!”