SVGE FutureSport 2014: Dolby and the Rise of Object Based Audio 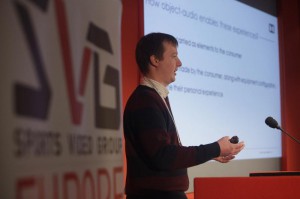 Sports fans have been offered a myriad of exciting new choices on the visual front over the last couple of years – and now audio, too, is playing an increasingly important role in delivering a personalised viewing experience. At SVG Europe’s FutureSport technology summit yesterday (2 December), senior product manager Rob France discussed Dolby’s innovations in this area with object based audio.

Contrary to what some might think, audio innovations have frequently “led the way over video… data rates are generally lower, the storage capacity is lower. It all happens first with audio!”

Despite this, consumers have often be offered “more choice for video, but not necessarily around audio. Sports is all about the fans and they want different stories. For example, when their team is winning they want one of celebration and when they are losing they want one of commiseration.” Audio, he suggested, can help to deliver this appropriately tailored experience.

Dolby’s efforts in this area are taking place around four key considerations. Firstly, accessibility that allows basic elements to be adjusted simply: “for example, some people say they can’t hear the commentator and others want it turned off.” Secondly, personalisation: in order words, “modifying the presentation to match the listener’s preference”; immersive design that “puts the consumer into the action and the venue”; and adaptability, with objects that can be mixed “according to the [requirements of the] system the person is listening on”.

Object based audio, says Dolby, will see “audio carried as elements to the consumer. Choices are then made by the consumer, which along with the equipment configuration defines their personal experience. The system then blends the final mix, under metadata control, while maintaining loudness [requirements] and quality.”

France emphasises that it will still be personnel in OB trucks who create the mixes; after all, if consumers are “given too much technical control there is a risk they can negatively affect [the overall sound].”

So the onus with Dolby’s efforts in this arena is to deliver “simple choices like ‘I am a fan of this team so please give me something that matches this experience,’ such as simple volume control.” It’s straightforward but, says France, gives them “a meaningful choice”.

Clearly excited by the still-emerging technology, France also believes it will yield the opportunity to capture higher quality “specific sounds, for example ball sounds in different sports, in a much more detailed fashion” – ultimately enriching the fan experience in all manner of subtle and intriguing ways.