SVGE FutureSport 2014: RF camera use is growing but frequency problems ahead 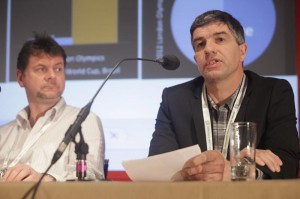 Moderator David Fox began the FutureSport panel discussion ‘Wireless Cameras for Sports: New Product Innovations and Frequency Challenges Ahead’ by asking each participant to provide a view of the RF market as seen by their respective companies. “The RF world has seen changes beyond recognition,” asserted Nick Fuller, technical project manager for Broadcast RF.

“Thirty years ago, RF cameras were very specialised and the average sporting event didn’t use them. These days we’re typically fielding 20+ radio cameras for a variety of events and we have the opportunity to use small, lighter units that we can put on sports participants these days — skiers, F1 drivers, Superbike riders.”

Stuart Brown, broadcast systems director at Cobham Broadcast continued the theme of Point of View (POV) cameras. “We supplied the first batsman cam in Australia, providing his perspective as the bowler runs in. But for us the use of Mesh Technology is a major area of interest.” He pointed out that the technology was employed for the first time at the Oxford-Cambridge boat race – providing control infrastructure on the move. It is also deployed on Formula One pit lane cameras to give reverse vision for the presenter and provide race stats on an iPad using a private network based on the mesh system.

The launch of Formula E has presented opportunities for Laurence Venner, solutions engineering manager at Vislink. “We have previously been involved with the onboard cameras for F1, but the biggest movement for us is the transition to 60p in 2K workflows.”

LiveU has pioneered the use of bonded mobile broadband links for live delivery. “We offer solutions that can run on vehicle mounted transmitters and backpacks right down to consumer devices for delivery,” explained regional sales director, Paul Shepherd. “Our technology is used widely for breaking news stories, but increasingly we are seeing it involved with important events coverage. What is really significant is the amount of live broadcasts, rather than store and forward applications. At the London Olympics it was about 50 per cent, but at the FIFA World Cup up to 98 per cent of our transmissions were live.”

So, what will be the impact through the increasing use of spectrum by other organisations? “We’ve already lost about half of the bandwidth though the use of 3G mobile use,” confirmed Fuller. “It made us concentrate on making the best use of the spectrum.” 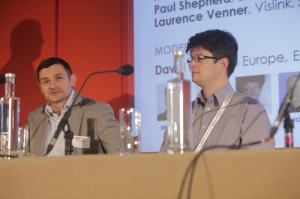 He said that rationalisation by the UK Ministry of Defence (MOD) means more of the very valuable 2GHz band and nearly all the 3GHz band will be lost. “That will leave us with approximately 20 frequencies, half of which are currently taken up news broadcasters. However, OFCOM is offering us alterative frequency band up in the 7GHz, which works perfectly well in stadium sites, but it is not so good when you are trying to cover outside events, such as golf, where you really need the 2GHz frequency. And the problems will only increasing with more 4K demands.”

Brown believes the solution will be found with some serious blue-sky thinking. “For instance, do all cameras need to be transmitting a full bandwidth signal at the same time? Could we have a situation where some cameras on an OB will be transmitting on a low bit rate with a picture which is switched to full HD when cut up on the preview bank? This is where mesh networks come in because they are on a single frequency.”

Shepherd made the point that the increase in speed of uploads on the cellular network has made the deployment of LiveU technology more attractive. ”Our growth has, in part, been due to the availability of those networks. But the strength of using a cell phone system versus a traditional wireless system is quite different. So if you want to get feeds from diverse locations which are not latency sensitive our systems work really well — but in stadia it is not going to come as a direct replacement for wireless camera systems.”

With that in mind, did Shepherd see the use of WiFi technology as an alternative? “Where there is use of unlicensed bands, the reliability is questionable. What we offer is the chance to bond together cellular connectivity with the WiFi, and at the end of the WiFi you can have another cellular boned device.”

The discussion concluded with a look at the future of RF technology and the direction it needs to take. Shepherd believed that the development of cellular networks will make the difference. “We’re looking at other devices such as smartphones and laptops. Any such gadget could be an RF device.”

For Venner, the question of resolving quality is important. “We have to find ways of developing more resolution, more colour depth and improved frame rates. We do recognise that 4K will be deliverable to the home and that is where we are looking.”

Brown says that those involved need to look at all aspects of wireless cameras. “H.265 is coming along which will reduce the bit rates, but won’t condense them enough that you can bolt them on to an existing RF system and expect it to work. We also need look at some kind of white space device that will have a chunk of bandwidth and the whole RF system simply controls itself – deciding whether it will send a full quality picture or a low quality thumbnail type image. That’s the only way we are going to get anywhere near the 4K requirements.”

The key to the survival of wireless cameras is long-term security of access to frequency bands, stated Fuller. “Manufacturers will need to know that it is worth making equipment in that frequency band because people will buy it for the next 15 to 20 years. The important thing is to keep the spectrum we have available to us, and not lose any more. There is no other way of getting quality RF pictures into an OB unless there are some very clever technology changes in the future.”