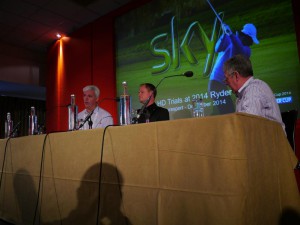 Sky Sports has always used the Ryder Cup as an opportunity to advance sports broadcasting technology and the 2014 edition was no exception as the channel undertook a massive 4K trial designed to answer a number of questions related to 4K productions. Sky Sports technology and production leaders detailed their findings at FutureSport, SVG Europe’s annual conference dedicated to exploring next-generation sports content creation and delivery.

“Every two years we have pushed the coverage of the event, whether it was introducing more radio cameras or 3D and, subsequently 4K,” said Keith Lane, Sky Sports, director of operations.

The Sky Sports 4K production of the Ryder Cup originated from Telegenic’s T25 OB truck with transmission via a BT van to Sky Studios in London. It was there that Sky Sports set up a number of encoders in order to test the signal quality via different encoders as well as different bit-rates.

“We are at an evolutionary stage in 4K and the amount we learned in three days was greater than spending a whole year reading textbooks,” added Chris Johns, Sky Sports, chief engineer, broadcast strategy. “It’s vital to do these tests in the wild.”

Among the top findings:

– The 4K-consumer experience will require sets of at least 65 inches in order to easily notice a difference.

– Pulling focus in 4K will challenge even the best cameraperson

– And the post-production process is much more complex as working with multiple file formats, storage and editing devices can still be “painful”

“Cutting clips and highlights on the replay devices and reingesting them in the truck worked really quite easily,” added Robin Broomfield, Sky technical manager who oversaw the project. “But dealing with the file formats and what to do with them after the event was not so easy.”

The first challenge for the production was simply figuring out what would be possible given that 4K-capable equipment is not readily available in the scale needed to produce a golf tournament.

“The idea was to be at the first tee, the fairway, and the first green for the iconic start and also do the fourth and sixth holes as they were par three holes and easy enough to follow the ball,” said Lane.

Once groups passed through those holes cameras were then moved to holes 16, 17, and 18 in order to capture action at the end of the tournament.

“The workhorse for the production was Sony F55 cameras as Telegenic owns them and they have been tried and tested before during football trials and the World Cup,” said Broomfield.

Sky Sports also used 2/3-inch cameras from Grass Valley (the LDX) and Hitachi (the 4000), both of which deliver the deep focus range that is found in today’s HD cameras and, more importantly, are easily compatible with today’s HD zoom lenses. A Sony F65 camera and an iMovix Ultra HD slo-motion camera were also used. Lenses from Fujinon, Canon and Angenieux were also on hand so that the Sky team could experiment with different lens and camera combinations. Replays were handled via EVS XT3 servers, an EVS Dreamcatcher, two Grass Valley Dyno replay servers and two Sony UHD1000 servers.

One challenge in the deployment was power, as the camera sheds did not send enough power to units in the field. “Some cameras needed to be powered locally so that is one of the little challenges we had to overcome,” added Broomfield.

One of the surprises, said Broomfield, was the better-than-anticipated performance of a Sony adapter that allows traditional broadcast lenses to be attached to Sony f55 and f65 full-frame sensor cameras.

Figuring out a bandwidth sweet spot is an important finding for the future of 4K services and Johns said that Sky Sports worked with bandwidths as high as 160 Mbps and as low as 40 Mbps. A 6000 Mbps transmission path between Gleneagles and Sky Studios allowed for 4K content to be transferred via Ericsson, Ateme and NTT technologies.

“The sweet spot was around 100-120 Mbps [for contribution] which is similar to what we used for football tests in Wales last year,” he said.

One significant learning was the use of HEVC coding with Vixs 4K decoder. After transcoding via h.256 to 50-frame progressive it was found that it was hard to tell the difference between an outgoing signals sent out at 30 Mbps and the one that was then fed back via a return feed at 30 Mbps.

That kind of finding shows the promise of 4K and UltraHD. Now the challenge is making it a reality in the consumer marketplace.

“You need to pay attention as, like during the move from SD to HD, it is not just plug and play,” said Lane. “And we had some great success and are happy with what we produced.”