SVGE FutureSport 2014: the progress and potential pitfalls of audio-over-IP 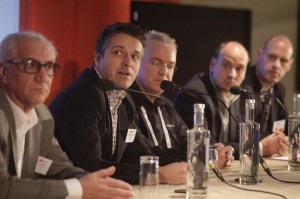 By common agreement, the audio-over-IP (AoIP) “freight train” has been moving forwards for some years now – but how long might it be before it reaches its destination? This was one of the questions up for discussion during a panel on the likely impact of AoIP on sports broadcasting that took place as part of SVG Europe’s FutureSport event on 2 December.

Greg Shay, director of technology at Telos Alliance, confirmed that AoIP is really nothing new. “We started to use it in our work in radio stations about 14 years ago,” he said. “It very much does work and we now have thousands of stations on the air using exclusively IP audio. The next threshold that we really need to think about is interoperability.”

Stefan Ledergerber, director research & development at Lawo Group, agreed that this was the overall drift, but urged that thought be given to the AoIP business case. “There might be doubts [about implementation] but we know what we have to deal with,” he said. “As a manufacturer this is a great challenge, but it is also a terrific business opportunity for everyone. The IT side does help us to make that case as people are buying into standards commodity stuff.”

With no shortage of AoIP solutions now making their way onto the market, the question arises of how broadcast customers begin to make an infomed choice. Clear-Com product marketing manager Vinnie Macri believes that any decisions have to be driven by applications. “It’s not always going to be practical and affordable [for every application],” he noted.

Everyone agreed that bringing broadcast and IT engineers together in planning systems is absolutely critical. Unfortunately, it appears there is still much work to be done in this regard.

“I have been in situations in the US – where they tend to have larger audiences for sports and where even high school sports are televised – where there is a real disconnect at the venues between [the broadcast people] and IT,” he said. Broadcasters don’t necessarily “think to bring in the IT guy as [the main focus] is on content; second screen and the need for more stats and information are driving everything.”

These issues aside, Ledergerber highlighted the advances that have been made in IT infrastructure. “If you think about IT five years ago and today, modern IT infrastructures deliver much more than they did back then,” he said. “We have done tests on a network over hundreds of kilometres and it has behaved truly like a LAN. I am not saying that would necessarily be practical to some remote location, but don’t forget that [the IT industry] is moving rapidly too.”

Returning to the application question, Riedel Communications CEO Thomas Riedel said that users need to think long and hard about the benefits vs the challenges. “If, for example, I am feeding MADI or SDI in and I want to get MADI or SDI out, why put an IT network in between with all the hassle that involves?” he asked. “In conjunction with applications, you need to think about flexibility; if two hours before the show someone says I want to change certain things here but the IP system is up-and-running and it’s not easy to change it [then you have an issue].”

However widely AoIP might eventually be deployed, Calrec sales & marketing director Henry Goodman says that “manufacturers have a responsibility to make the transition easier. We have developed networked tools and management software which takes that technical responsibility away from operators and leaves them doing what they should be doing – which is probably more creative than worrying about whether they have patched something from here to there.”

Whatever your view on AoIP versus established methods, there is no doubt that the public demonstration of interoperability between different manufacturers’ equipment will be a vital determinant of market adoption. And when you are talking about interoperability, you are inevitably going to have to think about formal standards.

It’s still early days, AES67 – a standard for AoIP interoperability that was published in September 2013 and has already been adopted by leading network solution providers such as Audinate (Dante) and ALC NetworX (Ravenna) – would appear to be a vital step forwards in this regard.

Shay was closely involved in the development of the standard and reported back on the recent first multi-vendor plugfest. “We had a very good success rate with more than 16 vendors involved and almost everything working together. Virtually all of the audio companies have declared support for AES67,” he said.

But even once a standard has been ratified, it can still take a long time for the technology to achieve mainstream success. “It took a while a while to get MADI to that state and that is only 23 years old!” laughed Macri.

Last word to Riedel, who believes that “some benefits may only come in the next generation when IT technology is more mastered than it is today. When you can arrive with your truck and save 20 minutes on set-up than it could be a huge advantage. But it’s not plug-and-play yet and that is what we need to look at now.”