SVGE FutureSport: HEVC gets ready for its close-up in 2014 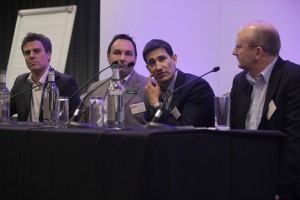 HEVC looks to be ready to make some serious inroads in broadcasting in the next two to three years as, after 20 years of offering services based on MPEG2, a new option is going to start hitting cable and satellite set-top boxes sooner rather than later. That was one of the defining messages to emerge from a panel session on next generation compression technologies during SVG Europe’s FutureSport event in London recently.

“It enables a new and better experience for TV viewers and from a user perspective it is also about accessibility as you can watch the HEVC content regardless of the network or platform,” says Fabio Murra, Ericsson, head of TV compression product and marketing.

With video-related traffic expected to take up 90% of Internet bandwidth within five years IP networks will be saturated and in desperate need of the primary benefits of HEVC: 50% reduction in required bandwidth compared to h.264.

And for broadcasters the use of HEVC will mean 50% less transponder space so they could either deliver twice as many services or also look to deliver next-generation services like UltraHD. But such a wide range of uses of HEVC also means a long rollout as encoders and decoders need to hit the market and consumer set-top boxes also need to become HEVC capable – something that cannot be done with a simple software upgrade. But mobile devices are a different story.

“There are 1.4 billion devices that could decode HEVC with a software upgrade,” said John Nemeth, Elemental, VP of sales, EMEA.

Nemeth added that one issue that remains is licensing with MPEG LA as patent holders will want a piece of the monetary action. The hope is that manufacturers will be able to absorb any licensing costs.

David Peto, Aframe, co-founder & CEO, said the patent issues are scary given that there are two partners refusing to play ball in terms of negotiations.

Once the patent issues are sorted the first place that HEVC will be seen will be on those 1.4 billion mobile devices. Expect that to happen sometime in 2014 after five new profiles for HEVC are introduced in January. One profile will be for home delivery but four will be for extending the capabilities of content delivery via better color, 422, and 10- and 12-bit depth. There will also be intra-frame-only encoding.

While the licensing issues get sorted out the manufacturers are moving forward with demos. Nemeth and Elemental, for example, offered their first live real-time 4K at 60 fps demo using HEVC transcoding in London on 10 December.

Andy Rayner, Nevion, VP of engineering, added that one challenge in Europe is that HEVC is designed primarily for progressive content and most channels in Europe are delivered in the 1080 interlace format. And interoperability between vendors and other formats like JPEG2000 also needs to be sorted out but he believes that Nevion will have a “story of decent interoperability between multiple vendors” in April 2014.

As for home delivery, Murra said that the initial prototype set-top boxes with HEVC can only handle 30 fps, a rate that is not sufficient for an immersive, live sports experience. But that doesn’t mean there is not a ‘wow’ factor.

“We did a live sports match at IBC and until I saw it I could not believe how good it could be,” he said. “The standards and technology is available. It’s just about the business operators and broadcasters finding the right time.”