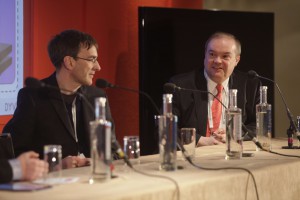 IP-based production could allow broadcasters make cost savings, and increase efficiency, particularly for one-off events where much of the production could be carried out at base, with only the acquisition done on site. FutureSport 2014 devoted two sessions to the topic, with the first looking at how IP might impact complete productions (the second session concentrated on audio, where IP-based systems are already established: https://www.svgeurope.org/?p=21279).

At the Commonwealth Games earlier this year, the BBC set up an end-to-end Ultra HD experiment via IP, with cameras at three locations, for the opening ceremony, gymnastics, boxing, netball, and limited coverage of some athletics. The experiment was an attempt to look at how production might be done in five or ten years time, “thinking about what it means to be a broadcaster like the BBC in the era of the internet,” said Peter Brightwell, BBC R&D, Lead Engineer IP Studio Project.

The project aims to develop an all IP approach to production, including sport. It has placed “a specific emphasis on live and near live work,” as IP and IT has already made an impact in post production, but is only beginning to be used for live production. “We’re looking at the opportunities for programme makers, audiences and facilities,” he said.

The experiment was spread across three cities, with the Games based in Glasgow this was also where it had its main production gallery (in the Glasgow Science Centre, beside the BBC’s main Scottish studios), which was viewable by the public. The audio production was done in London, with a back-up gallery in Salford. “This was all made easier by the use of IP.” The BBC’s two R+D labs are based in London and Manchester (beside its Salford sports centre) and are linked via a 10Gbps connection.

It wanted to find out how best to move content around the organisation, and country, to make sure that everything is linked together, as flexibly as possible, and to find out how easy it is to add content, what impact IP has on people and resources, and, in particular, to study interoperability.

“We use off the shelf kit where possible, but we have to write a lot of software,” he added. Most of this is based on general web-based protocols (multicast, rtp, http, etc.), “to make a distributed production framework work.”

Although the very first link, from the Sony F55 cameras, used quad SDI, the video was put into IP as early as possible, with a high-end HP capture workstation sitting beside the tripod performing H.265 encoding, “so that we could do IP production as much as possible, glass to glass.” It then used software-based vision mixer, storage nodes and viewing, and worked with several connectivity partners, in Virgin Media, Janet, Cisco and BT.

Today, Brightwell admitted, there is nothing easy about IP-based production. The easiest parts are those that are well established, such as converting to a web streaming format. However, as the BBC is using low compression, “we have a lot of challenges in terms of network performance, multicast problems, getting the synchronisation. We are successfully addressing all these things, and the industry is definitely getting on top of it.”

The big challenge is making it robust enough for practical work in a distributed environment. “There are a lot of configuration issues, a lot of problems with how to find something on the other side of the country in a reliable way.”

Although it is still early, but Brightwell sees “so many possibilities out there.” The BBC now hopes to join with other broadcasters and manufacturers to create a coherent industry message on how IP production develops, working with other companies on future standards, such as how a device announces itself on the network or does synchronisation.

Moving to production to IP will be “a revolution, rather than an evolution,” said Philippe Van Walle, General Manager, DYVI Live. Its systems have now gone into use at Dutchview and Infostrada.

DYVI’s hardware is just a single switcher panel. “We don’t have more panels because the software has been developed so that the panel only lights the buttons that are relevant for you at that moment,” and the systems “don’t limit us to traditional hardware.” It uses a standard IT server, with its own I/O cards (24 inputs, six outputs per server), and to scale the system up just requires adding servers. It has tested it with up to eight servers, which gives a 192-input switcher.

The servers are connected by fibre, so they can be a long way from each other, but it requires a 10Gbps connection. At the remote site, all the sources (such as cameras) are connected to a server, which generates a multiview that is sent to the master server. The switching is performed on the remote server, so that only the final images you need are transmitted to the master control. Everything is uncompressed, for live use and to limit latency.

“This allows you to do real live without any compromise,” he said. Indeed, the total latency is always five fields, and unlike a traditional switcher, each DVE move does not add latency, so it is always predictable.

The system is also useful where production studios are spread around a campus or business park. Instead of having a 4M/E switcher in every studio, there just needs to be one server per studio taking in all sources, with a switcher panel in one or two galleries, allocated to whatever studio you select on the network.

“It gives you a large saving in hardware, because those 4M/E switchers are never in use at the same time.” All the sources are also available wherever you are on the network. “So, you could imagine mixing the Olympics in Rio while you stay here in London and at the same time take sources from New York.” All at a latency of five fields, plus 10 milliseconds for every 1,000km. “So what is being added is still short enough to allow a real live production without any compromises.”

The big telecommunications companies are used to long-term rentals, but broadcasters may only want a day, which is why Van Walle now spends a lot of his time talking to telcos, “and some of the big telcos are starting to identify the potential business model here,” he said.

“We typically need a line on a couple of hours on a Saturday afternoon.” These attitudes are changing already in the US, “and also in Europe the telcos are starting to open their minds to this new potential market for them.”