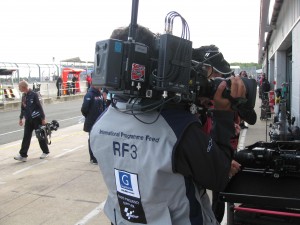 Vislink’s new UltraCoder (on the side of the camera) in use in the pit lane at Silverstone August 30, for BT Sport

SVG Europe’s Sport Production Summit in September featured an engrossing panel session examining the remarkable story of innovation behind the August launch of Europe’s first 4K channel – BT Sport Ultra HD. In our follow up at FutureSport December 2 in London, we will explore the challenges of taking 4K on the road with the channel’s purpose-built 4K OB truck.

We look at the major sports events the truck and production team have covered to date — involving an important series of ground breaking technological innovations along the way. The session will be presented by Fergal Ringrose, SVG Europe Executive Editor, in conversation with Andy Beale, BT Sport, Chief Engineer and Jamie Hindhaugh, BT Sport, Chief Operating Officer.

August 1 saw the launch of three channels by BT Sport: in addition to BT Sport Ultra HD were the new BT Sport Europe and BT Sport Showcase channels. The timing of the launches related to BT Sport’s successful bid to become the sole UK rights holder for all 351 games of the 2015-2016 UEFA Champions League and Europa League season.

BT Sport and its valued technology partners have continued to innovate in this, its first quarter of live Ultra HD production – making it a world pioneer in 4K UHD broadcasting. SVG Europe’s FutureSport at The Kia Oval on December 2 will provide a unique opportunity to gain insight into the broadcasters’ UHD journey from inception into regular live sports broadcast production and delivery.

For more information and to register: https://www.svgeurope.org/future-sport-2015/