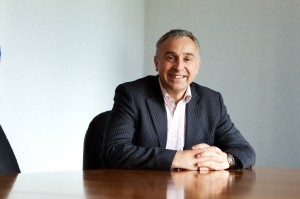 SIS Live is reinventing itself as a connectivity provider to UK live events and plans to double the number of stadia connected with its fibre network to 100 by 2016. After beginning the year under the cloud of closing its OB division the company is looking ahead to what it identifies as a significant growth opportunity.

“Our links business had been growing rapidly, albeit hidden from the more high profile OB type work,” said SIS Live managing director David Meynell. “We have been investing significantly in connectivity infrastructure and expertise in parallel to the difficult closure of the outside broadcast unit and while we retain some key OB skills and kit, our primary objective now is to sell connectivity services and bandwidth.”

To the 30 horse and dog race tracks it has already connected with fibre, this year SIS Live has added all 20 Premier League football grounds. This network has begun supporting links provision of soccer highlights for a major UK broadcaster and for coverage of FA Cup weekend games via Input Media (SIS provides Input Media with a minimum of eight HD uplink trucks each FA Cup weekend). The 1Gig fibre circuits are housed in temperature-controlled cabinets at each ground and include encoding to MPEG-4, MPEG-2 and JPEG2000 up to UHD, backed up by satellite.

“We are offering a real, enhanced service for customers compared to what they had before,” said Meynell.

For ITV Sport it will deliver similar connectivity services around the Rugby World Cup next October. Having already fibred eight of the 13 championship stadia it is in the process of adding the other five including Wembley, Twickenham and Cardiff’s Millennium Stadium for early 2015.

“We want to compete for other work at those venues,” he said. “This is part of a wider strategy to double our venue capacity [for connectivity] in the UK by 2016. We are actively targeting another 50 venues which host sports or other entertainment events like the O2. The requirements in this sector are growing significantly.”

With an infrastructure that boasts Ka, C, Ku band and DBS up and downlinks, 32 lines to BT Tower, teleports in MediaCity and Milton Keynes, two MCRs and a fleet of hybrid fibre and satellite connected trucks Meynell believes the company is in a unique position.

“No-one else can offer the range and depth of services to media customers,” he claimed. “We can manage the entire transmission chain for customers. We offer mid-to-low cost options where a customer turns up with an OB truck or crew and plugs straight into our fibre, all the way up to full hybrid connectivity for multiple feeds of a high profile sport event anywhere. Since there can be absolutely no failure resiliency is paramount.”

The company has divested its major OB assets over the course of 2014 but the firm retains capability in equipment and personnel to service certain contracts. These include two flyaway packs, one of which is at the Meydan Racecourse for the Dubai Racing Club Season, and another for ITV4’s 2015 production of the Tour de France.

It also reserved Link 21, the largest satellite uplink trucks in the UK, again for its connectivity attributes. This is intended for onsite links across large venues, such as at Glastonbury. 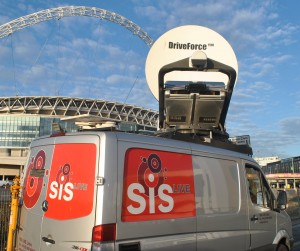 Meanwhile, John Bozza, former sales director at Arqiva, joins this month as the new commercial director. “John has huge experience on the DTH side of things, on teleport operations and on new types of technology,” said Meynell. One of the things Bozza will be selling is streaming – a field in which SIS Live boasts a world record. In November 2013 it live streamed 32 simultaneous feeds, one from each of the pods on the London Eye, for a Red Bull music event. “This was not your traditional OB but the sort of innovation we want to provide more of,” said Meynell.

Meanwhile, parent company SIS (Satellite Information Services) is investing in a streaming platform ostensibly to service the betting industry with live video and data but which is also set to become available through SIS Live.

“On the contribution side we have various ways can get content from a site to our platform,” he said. “For distribution we now have the ability to offer a full streaming service for broadcast and media companies wanting to live stream an event. This will be a big focus for us in 2015.”

It is installing the capability for up to 24 simultaneous streams in a streaming farm that will ensure high availability, automation and redundancy through the MediaCityUK teleport. The streaming farm features an innovative management system to control both the monitoring of the encoders and the switching of video sources in the event of any failure.

“It will allow SIS LIVE to deliver live adaptive bitrate streams via Adobe, Apple, Microsoft and MPEG-DASH to ensure compatibility with a wide spectrum of devices,” said Meynell.

SIS is also running a trial project at Chelmsford City (formerly Great Leighs) racecourse where every race feed is sent by fibre to SIS’ Manchester MCR for a full remote production. The idea is to expand this to other UK race meets, of which SIS holds the major contract to service the UK betting industry. SIS major shareholders are the bookmakers Ladbrokes, William Hill, Fred Done (owner of Betfred) and Tote.

“Racing lends itself well to this because the races are staggered so you can switch from one course to another across the country on race day with live events, switched from a central production area,” he explaied.

“We’re working with lots of newer types of platform and broadcaster like Red Bull and Google. They want live content, some of which was previously cost prohibitive. We are looking at sports that may not quite have the audience base for a traditional OB but can benefit from reaching a wider audience online. We see ourselves as sitting in the middle between our broadcast colleagues and new media type companies and offering the whole gamut of connectivity services.”

Remote production and live streaming are a substantial part of future outside broadcasting yet there is life in the traditional truck OB yet.

“Because the sale of Premier League Football rights amounts to millions of pounds per game I see a long term future for the 20-camera OB based at the ground,” said Meynell. “I can’t see that changing in 10-20 years.

“The bottom line is that whatever happens to OB, the connectivity part is getting bigger and will only get bigger still with 4K. If I were still in OB, I’d be less keen to make the big investment into 4K because you can only pass on a small uplift to customers. It’s hard to differentiate against your competitors in OB. It’s almost a commoditised business. That is in contrast to connectivity where you can offer lots of innovation.

“One of the benefits of connectivity, when you have a certain scale by buying satellite space in bulk and putting widespread fibre down, is that we can offer customers real value and still make some reasonable margins.

“We work with lots of OB companies like Telegenic and CTV and we not only wish all the staff who we had to let go all the very best but we only want them (OB companies) to succeed.”