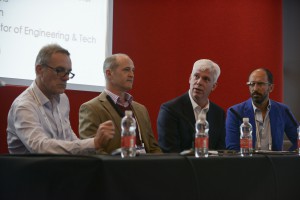 With the Winter Olympics and FIFA World Cup alone making this a hugely important year for global sports events, an essential question arises as to whether sports broadcasters are matching these landmark tournaments with suitably innovative production set-ups. This was the central issue of the final panel session held during SVG Europe’s SportTech conference on 7 May.

Panellists began by considering specific milestones for their own employers during 2014. For David Shield, SVP global director of engineering & technology at IMG Media, it has been “the availability of cheaper connections, particularly in the UK. We have managed to fibre up to every Premier League venue, and apart from the competition level this has allowed us to do some tings for licensees that the Premier League could not do before, for example [additional] wide shots, clips channels, etc. [In essence we are] giving them a toolkit to make the most of rights values.”

Dan Miodownik, HBS director of production, highlighted the mounting appetite for delivering workflows that are “significantly enhanced. Also, the growth of second screen multimedia.” Turning to the now imminent FIFA World Cup, Miodownik echoed the widespread view that “the real challenge won’t be about the stadiums being ready – they will be – but whether we have enough time to get in there, test the equipment and get all the snags resolved so that when viewers turn on they get the picture we want them to see. That will be the real challenge over the next four weeks. Fingers crossed, but it will be a lot of hard work.”

Also looking ahead, Keith Lane, director of operations at Sky Sports, suggested that an imminent major boxing match at Wembley in late May has the potential to be “a big step for Wembley and for us. There is a football match there [the night before] and we have just 19 hours to get everything in place to host 80,000 people. Technically, we are going to keep it simple, but it still means 22 cameras, lots of video and production.”

On the subject of cameras, Miodownik ventured that we are now “moving away from the camera arms race. I think [directors] have enough cameras now; the question is more what they do with them and what can be done with them so the [end-product] has richness. It’s all do with the viewer experience.”

Sporting some Google Glasses for added inspiration, Carlo de Marchis, chief product officer and group director at deltatre, pointed out the scope for offering full digital services to events with global pulling power. “What HBS are putting together for the World Cup constitutes an amazing effort in a very traditional environment. Bear in mind that it’s a very different event from the Olympics, [but there is an aim to] reach the same level of multiplatform production,” he said.

Perhaps inevitably, there was discussion too of the emerging 4K format and its current relevance to live production. In general, the feeling was that it’s more a question of ‘when’, not ‘if’, but that significant hurdles remain to be overcome. On the consumer side, “having been through SD, HD and 3D, we are looking around for penetration of screens that people are using. [There is also the fact] that there is not a lot of 4K content at present,” said Lane.

Given Japanese broadcaster NHK’s expectation of having an 8K workflow by 2016, ahead of introduction in 2020, there was also consideration given to whether 4K might ultimately prove to be a technological stepping stone. Whatever the case, remarked Shields, “if we solve the problems for 4K, a lot of them will also be cured for 8K as well.” Lane, meanwhile, suggested that “not many manufacturers are jumping around saying ‘let’s do 8K’. There will be more kit for the 4K world, I think.”