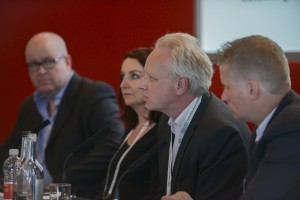 The Digital Production Partnership is a not-for-profit partnership funded and led by the BBC, ITV and Channel 4 with representation from BSkyB, BT Sport, Channel 5, S4C, TG4 and UKTV. It exists to help speed the transition to fully digital production and distribution in television. File delivery will finally bring end-to-end digital to UK broadcasting – and for most broadcasters 1 October is the end-date for the transition.

What does this 2014 seismic shift mean for all broadcasters, producers and post houses? What standards, technology and workflows are necessary to connect studios, post and playout? Our DPP session at SportTech Europe tackled these questions, led by moderater Russell Grute, founder and Managing Director at Broadcast Innovation. Grute began by asking Andy Beale, BT Broadcast Chief Engineer, to describe how and why that broadcaster became the first in the UK to be ‘DPP compliant’.

“When we were designing the facilily we needed production interoperability between our production and playout partners. We needed to settle on a standard that would be recognised by everyone.

“I had been keeping an eye on the DPP’s work,” said Beale, “and there were two things in particular I was interested in. The first was that we would become less tied to vendors and partners – by that I mean that having a standards-based file format that was completely interoperable across the industry would allow us the flexibility to be agile and move things around.

“The other thing about a standards-based file format that would be really useful to us in the sports world was that it allowed us to put more pressure back on the content suppliers to meet our specification. Typically we found content providers reluctant to deliver standardised content — which would mean a very large price tag to process that media into our house format.

“The difference with DPP, because all the broadcasters were involved, was that, for the first time, content vendors took this standard seriously and were willing to re-master or re-encode content into the correct file format for us – meaning that our overhead in terms of time delay and cost was reduced.

“As we evolve from the tape-based delivery of a tape, a box and a label,” said Beale, “what’s really key about this standard — and how we harmonise across all the broadcasters so that production companies and post companies can deliver without confusion all the time — is not just the video essence but the metadata. So to standardise the metadata across everyone… it’s something people are struggling with right now but I think in 18 months they will be really grateful that we did it this way,” said Beale.

Moderator Grute asked Mark Hill, Ixedia Managing Director, about the importance of DPP for sports production and the role of metadata in the life of a media asset. “There’s really little point in having standards if everyone chooses to use a different one! And there are an awful lot of standards around in media – more so, I think, than in the bad old days of videotape,” said Hill.

“So the DPP standard is really a landmark, in so far as it has been developed from the end-users up rather than from the technologists down. The broadcasters have got together finally and said, ‘enough is enough, we should be able to put our finger on what is a fit-for-purpose standard for delivery of finished content in SD and HD’. It’s very laudable, and it’s also a standard that doesn’t really invent very much that is new: it draws on existing standards and profiles and customer practice.

“One of the nice things about the AS-11 standard they’ve adopted is that it really is by common consent among the major broadcasters a fit-for-purpose broadcast quality, and a fit-for-purpose production quality and therefore if you can cope with the bitrates and the storage requirements and the bandwidth requirements it’s also suitable for use as a flat file common file. So you don’t need mezzanine formats now to drive your transcoding farms to then power a plethora of different media files for over-the-top delivery – and for every one file that gets delivered for broadcast you might be making ten or twenty different versions of it in different formats for cable delivery and OTT and for apps. So long as you can cope with the loading that the 100 Mb HD version puts on your systems, then you don’t need to make all the separate mezzanine formats as well as all the end user platforms.

“People must understand that the metadata is at least as important as the audio and video if not more important,” Hill emphasised. “What we’re trying to do at a macro level as technologists is to put more money into the hands of the people who are actually creating the content. And the way we do that is to drive out creativity in what should be essentially mechanical processes – taking bits of content from A to B and getting them on the air. What should make those processes mechanical is being able to rely on the metadata to make business decisions. And if the metadata is not right then the whole system falls apart.”

Alexandra McDevitt is Head of Outsourcing & New Sites for Ericsson Broadcast Services, and thus someone with a vast knowledge of the European television channel playout market and its requirements. Addressing the role of the DPP, she said “this is very helpful for Ericsson because we’re working on behalf of a number of customers. So for us, across multiple sites, to know what format we are going to receive and to have standard processing procedures in all of our hubs would be fantastic. It would make us very operationally efficient.

“I’ve worked in multiple countries for a number of years and the benefit particularly [of DPP standardisation] would be speed of throughput, which must be something that touches the sports industry specifically, as they are trying to get content to viewers as quickly as possible. One of the positive aspects of having standard formats, standard delivery mechanisms and standard checking processes, is that we can get the content to the viewer as quickly as possible through delivery,” said McDevitt.

“Instead of spending so much time creating a format for each platform we deal with, we could spend time on innovative ways of running our business and doing more innovative things for our customers. I would love us to be able to develop that further, and I noticed at IBC last year that a lot of the European companies were specifically telling me that their product was DPP-compliant. So I think other countries in Europe are looking at what we’re doing here in the UK with this — because for them it’s an opportunity to standardise their file formats as well.”

A major-vendor perspective on the DPP was provided by Craig Dwyer, Avid Senior Director Global Centre of Excellence. “Standardisation across the life cycle, across the value chain is extremely beneficial,” he said. “One of the challenges a lot of our clients have is that as they introduce more sophisticated workflows they’ve got a number of new destinations and delivery formats. And in transitioning to file-based operations, that has introduced lots more cost and complexity.

“And it doesn’t help us either, as a manufacturer, to try to support many different standards,” said Dwyer. “We’d much rather our innovation was going into the creative tools and the content management process – where value is added, from our point of view – rather than in compatibility and making the file lifecycle work.

“There’s lots of value in the DPP approach – it makes so much sense that the broadcasters have said ‘here’s an operating pattern that supports a business case: there are lots of people delivering programmes to us and we want to make that efficient and cost-effective’.

“Using the same approach would make major sense for the VOD platforms as well, if there are major differences there,” said Dwyer. “In the DPP metadata there is plenty of room for digital synopses for different packaged information. It’s somewhat dependent on what’s upstream, i.e. what’s creating the asset in terms of what you are going to want to deliver. But I think that having the business case driven by the operator (the end user) makes a tremendous amount of sense,” said Dwyer.

Sound and vision satisfactory for TX

During the session Q&A Shane Warden from IMG addressed the audience from the floor, pointing out that sports production is rather unusual due to the nature of the bulk of the people working on the ground. “At IMG we have discovered on the production side the metadata and the preparation is clearly very important and the dynamic we find in the sports world is different to other genres that always had quite a fixed pipeline in terms of their delivery because it was finished by specialists who are often staff in those facilities.

“Sports is very much a freelance world,” said Warden, “so not only are we trying to get a level of education across to people about this impending deadline but also giving them an understanding of the importance of almost going back to basics. When I was an editor I signed a sheet of paper that said ‘sound and vision satisfactory for TX’. [We need to] bring that back into play as a discipline, if you like, in a disparate community of people who rev up, get going and then all disappear again! We’ve started working with BT Sport and with Sky to try to address that — probably the hardest part of rolling out the DPP for sports and fast turnaround.”

BT Sport’s Andy Beale agreed with Warden, saying, “yes over the years the guys have got used to hitting play or sending to playback to an EVS and it goes through and they walk away. But now there’s a VOD catch-up version and a replay version and all these other versions for archive — and it would appear that those skills are not so strong in the freelance edit community.

“Also it’s about good practice: we actually took the approach that we didn’t trust editors. This wasn’t a negative thing; we wanted editors to do what they do best and we have our own senior guys who are effectively delivery techs. So when the guys send something to playback it’s not sent to OB for playout or on to VOD, they actually send it to a queue where the sports data guys look at the point of entry and the visual QC is done by people who know what they’re talking about to make sure those files are absolutely fit-for-purpose.

“The challenge and value of sports content is in its timeliness,” said Beale. “If we send it and find out two hours later it’s not right, well frankly we might as well have not bothered. Getting it right first time is really important and that’s why our approach is to have this team of people who are doing delivery day in and day out.

“It’s part of our managed services agreement with Timeline TV. There are three functions in what I call the media management cycle — ingest, support and distribution. This is part of the distribution function; people preparing content to send out either for video TX for for VOD.”