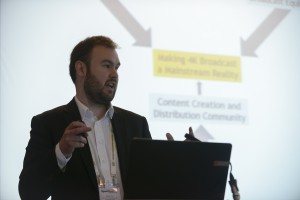 Futuresource Consulting’s head of broadcast equipment, Adam Cox, examined the probable roadmap for 4K from both consumer and manufacturer perspectives during an illuminating presentation at SVG Europe’s SportTech summit on 7 May.

As Cox (pictured) related, there is certainly no shortage of hyperbole surrounding the emergence of 4K. But in market terms, the technology is still in its infancy, and the extent to which it progresses will be dictated by what Cox described as a “complex web of influences”, including availability of consumer electronics and broadcast equipment, consumer awareness, and the general readiness of the content creation and distribution community.

On the professional equipment manufacturing side, there is certainly plenty of impetus to make a success of 4K. The industry, said Cox, is “emerging from a period of transition, [with] the move away from SD and tape no longer fuelling market growth.” The result is that a new driver – potentially 4K – is urgently required. Much the same goes for set manufacturers, who are also suffering from falling revenues, slowing replacement rates, increased competition and the fading of ‘traditional’ technology drivers.

Unfortunately for them, it seems that 4K may not be quite the hoped-for panacea. Futuresource data suggests that 4K screen uptake will be slower than for HD in Western Europe, with many customers expected to conclude that the new format does not constitute reason enough to speed up their standard replacement pattern. Turning to the production cycle, Cox pointed out that whilst availability of 4K-capable cameras is improving, other parts of the chain – notably acquisition and contribution – are in need of significant catch-up.

With plenty of questions, too, about the extent to which 4K production is currently a commercially viable proposition, it’s apparent that the technology’s future as a mass-adoption tool is by no means certain. But as Cox also observed, its benefits for sports production – including an improved viewer experience, exciting new production options and a fresh method of showing content – cannot be denied.