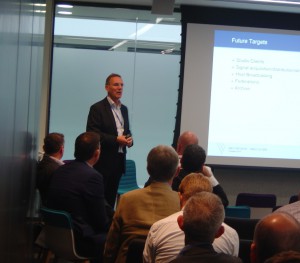 And in keeping with developments across the industry, closer convergence of corporate and broadcast IT is also in prospect. “Nick Wilson, the CTO of William Morris Endeavour [which acquired IMG in 2013), is a very go-ahead guy and has been brilliant for us and really got into what we are doing here,” said Shield. “He is interested in beefing up our IT infrastructure, so I think we are going to see a convergence of [IT teams for corporate and broadcast], with some areas joined together and some personnel able to operate on both sides.”

This enhanced infrastructure will be brought to bear on a sports production portfolio that continues to grow from an already extensive base. Premier League Productions, notes Shield, constitutes “nearly 50% of what we do”, while IMG’s many other ongoing studio-based commitments include the Football League Goals Exchange, the BBC Football League Show and Trans World Sport.

Forthcoming projects cited by Shield include the 2015 Rugby World Cup – for which IMG will be providing the IBC, preview coverage and highlights – and the continued evolution of IMG Gaming: “It’s an initiative from our rights’ guys whereby rights can be sold separately into betting chains. Through a partnership with Livestream, we currently have 20 streams going into betting shops.”

Shield wound up the presentation – and the entire day, which attracted more than 80 delegates to IMG’s facility in Stockley Park – with a rundown of future targets for IMG Media, including: the addition of more studio clients; the further development of its signal acquisition, distribution, streaming and clipping capabilities; the pursuit of more host broadcasting clients; and extra work with other sports federations. He also expects the archiving side of the business to be “quite busy – I think what we have done with Cambridge [Imaging Systems] on the ATP achive is a good example of what federations will want on the B2B side.”