SVGE’s Football Production Summit: much work still to be done in defining the 4K roadmap 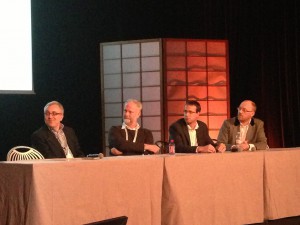 Moderator Ken Kerschbaumer put it to the panel that although there was considerable excitement around the prospect of 4K, there were many lingering questions about distribution. Causon agreed, but encouraged delegates to remember that “we had the same problem with HD… six years ago there were probably about 85 definable standards. Everything eventually comes into line and I think we will see that happen with 4K over the next 5-6 years.”

He encouraged producers, standards teams and manufacturers alike to remember that “keeping the picture beautiful is really key as we go to larger screens. I was watching rugby on an 85-90” screen the other day and it really did not look good. When people are watching decent money to watch something like football, it really should be at the best possible quality.”

There is a general industry acceptance that higher frame rates are required for broadcasters to deliver 4K sport in a quality that will be acceptable to an increasingly discerning audience. Pauwels, for his part, highlighted the massive step-change ahead “in terms of bandwidth. That [encompasses] the processing side, taking care of transmission, then after the event also having to keep content at the speed it’s been produced [in storage]. It’s great to have more pixels, but they need to be taken care of throughout the whole chain.”

In his own presentation, Clennell hinted at dock10’s own close interest in 4K, but urged the industry not to “bundle it together with 3D; I’ve noticed that they are often mentioned in the same breath. 3D was very much about a product, an output, that went down a tangent with a very specific role [in mind]. 4K, I think, has all kinds of applications: in production it can be a drive to quality, [including] the delivery of rushes that can be put into archive. For dock10, it’s great for drama, but I can also see it rolling out to live workflows and fast turnaround too. [On the other hand] I can’t see myself living in a house big enough to hold a 90” screen, so I am not convinced we will have [4K] in the house soon.”

Causon seemed more optimistic about the domestic outlook, reporting that “even on 32” screens customers can see the difference, but the question is whether you are willing to pay extra for it… do they perceive the benefit as being sufficient?”

But with Japan confirming its intention to broadcast 8K by 2020, could it be that any clarity the 4K message has acquired could soon be diminished? “We can talk about 8K, but we need to get it into the pipe and compress it [sufficiently first],” said Causon. “Until we can deliver 8K in the broadcast chain, it might be an academic question.”