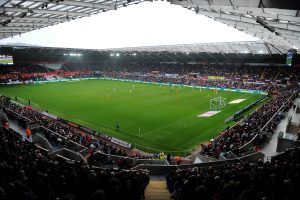 A general view of the Liberty Stadium in Swansea, Wales, during a Sky Bet Championship match

At the start of the current football season EFL Championship side Swansea City took the plunge in providing its own studio-based multi-camera production and live streaming service direct to fans.

The club enlisted the help of Blackmagic Design and StreamAMG – along with football broadcast production consultant Peter Knowles and his StvdioExpert team — in what was a very tight timescale, given that the club had been relegated from the Premier League in May 2018. A decision was taken not to opt into the English Football League’s existing iFollow streaming service, which provides basic live match coverage for all 72 clubs in the EFL’s three divisions.

Swansea City head of media and marketing Jonathan Wilsher told SVG Europe, “It was a new venture for us, having dropped down from the Premier League – it was the first time we were offered the EFL’s iFollow streaming service. But we found it restrictive, in that it was only one camera. And at the time they were overlaying the BBC commentary onto the pictures as well. 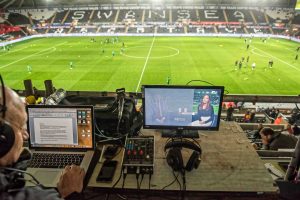 The broadcast suite and studio for the Swansea City AFC live broadcasts at the Liberty Stadium, Wednesday 30 November 2018

“The big thing for us was that we wanted to give our fans the best possible service, within a limited budget. Obviously, finances played a major part, dropping down from the Premier League – all of a sudden you’re losing millions in revenue, so you have to be careful in how to invest to improve the offering to supporters,” said Wilsher.

“And during our time in the Premier League we had built up quite a strong following overseas, and I think that was key to our decision making as well, to give them a good service having been able in the past to watch all the Premier League games live.

“Most iFollow clubs will produce the match: as a subscriber, you log in just before kick-off and watch the game off one camera – with nothing happening on the pitch at half-time. Instead we produce, for pretty much all the games, a 30-minute pre-match show onto the StreamAMG streaming service and onto Facebook, with a presenter and a guest. Included in that is a pre-match interview with the manager, going through his team selection from the tunnel, which is unique content which you can’t get anywhere else.

“During a home game, we have three/four cameras, with one in the tunnel and three camera 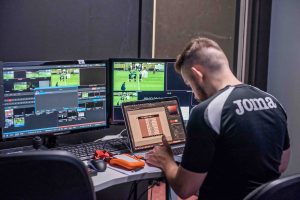 production during the game (with two cameras at away games). The fans get replays of key incidents with graphics as well, which wasn’t included in iFollow. We have our own commentators on top, with main and again an ex-player as co-commentator to give supporters that extra bit of insight.

“At half-time, we go back into the studio for a show, with the guest running through the main highlights of the game reviewing the clips. We’ll have a pre-recorded feature played in there as well.

“And at the end of the game, we normally do a 10-minute wrap-up, again with highlights, where we will grab a player for an interview straight off the pitch, which also goes live into the show. That’s also unique content. We then put the whole lot and highlights onto our web site for free at midday the following day,” said Wilsher.

“We only put the pre-match show on Facebook – we can’t put any live action on there. We’ll also put the post-match press conference with the manager on Facebook and on our web site.”

The club’s streaming platform, SwansTV Live, has a live workflow featuring the Blackmagic URSA Broadcast and Smart Videohub 12G 40×40 router. Having enlisted the help of broadcast consultant Peter Knowles and his StvdioExpert team, the club deployed four channels of URSA Broadcast around the Liberty Stadium. 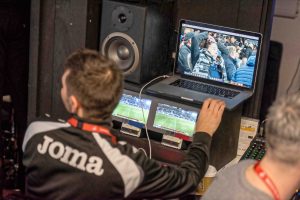 A purpose-built studio centred around a Smart Videohub 12G 40×40 router gathers in all of the live camera feeds via SDI, as well as the custom graphics and VT packages needed to produce the master program mix (PGM).

That is then taken through an ATEM Television Studio HD, which acts as a transmission switcher selecting the source to stream – be it programme or a holding graphic – before being fed into an AMG VoD server at 1080i50.

“The URSA Broadcast’s extended video mode is the killer ingredient for us,” said Wilsher. “Combined with good quality b4 lenses, the colour reproduction straight out of the URSA Broadcast means you have a really cost-effective system for live to air broadcast acquisition.

“Previously we had never done any live streaming (apart from the Under 23s) so this was a whole new adventure for us. And we’ve been pleased with the way it has turned out,” said Wilsher.

“The subscription side has been encouraging: we’ve hit the targets we expected to receive. It was a shot in the dark, with regard to the take-up. Having this level of control over our content has allowed us to engage with our fans and sponsors on a whole new level,” he said.