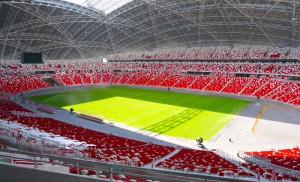 Alongside the flagship 55,000-capacity National Stadium, the 35-hectare Sports Hub complex also includes a 6,000-capacity Aquatics Centre and 3,000-capacity Sports Arena, among other facilities. Audio specifications across the site vary considerably and feature products from various manufacturers, but unifying all of these facilities is a digital audio philosophy based around Symetrix’s SymNet Edge open architecture Dante-enabled DSPs.

More than 85 SymNet Edge frames have been installed across the project in amplifier/control room racks and facility panels, providing the technical crew with versatility and support for Audinate’s increasingly ubiquitous Dante media networking technology. “SymNet Edge was chosen both because it powerfully supported Dante – the chosen audio distribution platform for this project – and because the modular input/output cards, including AES/EBU and the analogue I/O cards, provided us with the flexibility required when designing the audio distribution network,” says Gary Goh from Electronics & Engineering Pte Ltd (E&E), the project integrator and a long-term Symetrix distributor.

E&E, which also installed the original National Stadium’s audio system in 1973, required that the DSP system incorporate bespoke integration of Powersoft amplifiers – a process that entailed a close and successful cooperation with Symetrix technical support in Seattle, USA. “We worked with the Symetrix team to include customised Powersoft modules that allowed for integrated monitoring and control of K-Series and Duecanali amplifiers within SymVue and SymNet Composer,” confirms Goh.

Quick and easy remote control of the processing set-up is enabled by the installation of the SymVue GUI on technical personnel’s laptops and tablets. Transmitting and receiving up to 128 channels (64×64), the digital network itself is configured and administered over the site’s IT infrastructure.

Shure microphones, Mackie mixers and Daktronics screens also feature in an installation project that E&E laboured on throughout 2013 and early 2014. Goh reports a highly positive response from the venue operators, adding that the Symetrix processors played an important role in achieving this successful outcome. “Quality and reliability were fundamental requirements for this project and these factors certainly ensured the selection of Symetrix products,” he says.

Mark Ullrich, international sales manager for Symetrix, remarks that he is “delighted to see our processors selected for such a prestigious project and deployed in a way that truly exemplifies the benefits of SymNet’s Dante networking”.