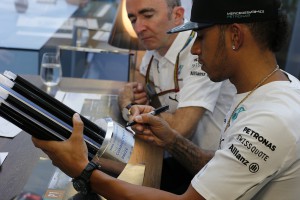 Their idea of how 60,000 hours of footage in Formula One Management’s digital archive could be catalogued was a hit with the judges and will see the team share $50,000. In addition, two of them will attend next year’s Formula 1 Grand Prix de Monaco as VIP guests of Tata Communications.

The winning team – Jody Allen, Tom Williams, Chris Randall and Chris Belmore from London – submitted a user-centric solution that could empower fans around the world to contribute to the process of cataloguing over 60,000 hours of video in Formula One Management’s digital archive.

The team proposed a solution to the ‘Crowd Sourcing Commentary Challenge’ where fans would be given access and encouraged to submit their ‘greatest moments’ compilation each week. Searching the archive, which has already been tagged with baseline metadata, fans could explore the relevant race and using the simple editing interface, find and clip their moment. The fan community would vote on the winning clips and the winners could receive VIP prizes. This user-centric approach could empower F1 viewers to catalogue the digital archive, whilst also adding a new dimension to the fan experience.

Lewis Hamilton says: “There were lots of really strong entries for all three challenges. The competition really seemed to engage the fans and sparked some great responses. The winning solution understood how race fans think and act, and how our sport can develop ways to connect with our fans at the race tracks and at home.”

Reflecting on their win, team leader Jody Allen says: “At the heart of our belief as Formula 1 fans was the conviction that everyone has their own treasured memory of key moments in the sport’s history. Some are the instantly recognised seminal events, others are highly individual and personal. By connecting these moments to narrative allowed us to build something that was more than just a rigid and structured database, but rather a fluid and dynamic set of linkages between everyone’s personal views of the sport. We’re delighted the judges’ welcomed our approach as the work required plenty of detailed consideration – and quite a few late nights.”

Mehul Kapadia, MD of the F1 Business, Tata Communications confirmed that the challenge will be back in the future. “We at Tata Communications decided to partner with Formula One Management and Mercedes AMG Petronas to give fans around the world a chance to show their creativity and passion for the sport. This has been a genuinely global competition, and we’re proud to have been a catalyst for some truly visionary thinking.”

John Morrison, Formula One Management’s chief technical officer, says: “I must congratulate all of the many entrants from around the world for the quality of their work and the self-evident effort made to compete in the challenges. The bar has been set incredibly high.”

A video of the judging and winning team can be viewed here: https://www.youtube.com/watch?v=qoeQjm91j74&feature=youtu.be